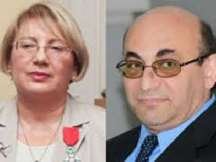 "As the latest generation of Soviet dissident Andrei Sakharov and followers, we want to support our colleagues in Azerbaijan, suffering for what valiantly defend human rights in their country," - said in the appeal.

With Leyla Yunus and her husband Arif we work since 1989, when, together with a small group of people began fighting for the honor and independence of Azerbaijan.

With their help, in the same year, Svetlana Gannushkina was able to meet with Azerbaijani refugees from Armenia. When in January 1990 in Baku pogroms broke out, and then were put troops that resulted in the deaths of dozens of civilians, only from family Yunus could get adequate information. This cooperation was not safe for them.

In January 1992, Leyla Yunus became coordinator first since the beginning of the Karabakh conflict a meeting of the Armenian and Azeri intellectuals. In the acute phase of the conflict, this meeting was of historic significance. It was attended by the most famous writers of the Caucasus - Grant Matevossian and Akram Aylisli.

Now Akram Aylisli is subjected to severe persecution for his novel Requiem "Stony Sleep", where he describes the tragic events of January 1990 and his native Aylis where Armenians and Azerbaijanis lived peacefully. Yunus wife were among the few who dared to speak out in defense of the writer. It is this peacekeeping put them now guilty of treason, the statement says.

The authors note that in 1996, Yunus created the non-governmental Institute for Peace and Democracy. All these years, IMD consistently upholds the right of every citizen in the fulfillment of the law, and humane treatment, a fair and honest trial.

Leila activity is known worldwide and has repeatedly noted international awards. In particular, it is the gentleman of the French Legion of Honor.

Hopes for democratization and mitigation methods of struggle for human rights defenders in Azerbaijan with the arrival in 2003 to power the young president Ilham Aliyev did not materialize. Methods of dealing with them have acquired the most sensitive and unacceptable forms, including the persecution of human rights of children. That is why the daughter of Leyla and Arif was forced to apply for asylum in Germany.

A new round of persecution family Yunus began this year after the publication of the list of political prisoners is now on the list and their names.

In late April, Leyla and Arif were not allowed to leave Azerbaijan. They were detained at the airport, their passports were taken and their home was searched, accompanied by cruel and degrading treatment. However, ignoring the danger, Leila and Arif continued to defend political prisoners, to expose rights violations and corruption.

July 30 Leila was arrested, while Arif first left at liberty, and then also arrested. They are facing serious charges of treason, fraud, tax evasion, falsification of documents. They face 15 years in prison to life imprisonment. Processes for these items are closed to the public mode.

From prison come reports that they are without a counsel, and face refusal to take medication and products for Leyla suffering from diabetes. According to the latest information, Leyla was brutally beaten in prison.

"Dear Members of the European Parliament, Leyla Yunus, like her husband, Arif, many years working in the field of human rights, democracy, protection against discrimination of national minorities.

They may be the most worthy bearers Laureates Sakharov.

The awarding of the prizes could protect her, Arif, and another 96 political prisoners in Azerbaijan from further persecution and at the same time draw attention to the unacceptable human rights situation in Azerbaijan - one of the countries of the Council of Europe.

This award could have an impact on the overall situation in Azerbaijan, unless and until it's too late," the appeal says.

The decision on the winner of the Sakharov Prize postponed