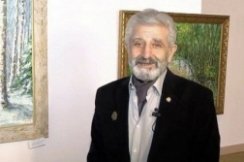 An exhibition of Binyamin Shalumov, a People’s Artist of Dagestan, an honored member of the Russian Academy of Arts, has opened in Moscow in the Permanent Mission of Dagestan. Binyamin Shalumov has participated in forty exhibitions, including 25 solo ones, in Russia, the US, Canada and Europe. His works are held in private collections in Russia, the U.S., Canada, the UK, Sweden, Israel, the Czech Republic, Switzerland, Belgium, Germany, Ukraine, Kazakhstan and the Dominican Republic.
The current exhibition is called "With an Easel through a City.” It is devoted to urban scenes. The exposition includes works the artist created on the basis of the his impressions from numerous trips to cities not only in Russia, but all over the world.
The author told Vestnik Kavkaza about the concept of the exhibition: "There are 50 works, urban scenes which were created in different countries and cities: New York, Amsterdam, Moscow, an Australian town. So, there is a broad spectrum of countries. And my desire is that people who have no opportunities to visit the countries will learn about each of them through my pictures.”
Moreover, at the opening ceremony a book titled "The Mountain Jews” by Binyamin Shalumov was presented. It belongs to a series of books "For Children about the Peoples of Dagestan.” Shalumov’s book is about the history, culture and traditions of the Mountain Jews.
Binyamin Shalumov told Vestnik Kavkaza about the idea of writing the book: "It is well-known that Dagestan is a multinational region where more than 36 peoples live. There is an idea to publish a series of books, which is called "For Children about the Peoples of Dagestan.” We have already published six volumes. The seventh volume is my book about the Mountain Jews. Even though it was a difficult task for me, I was glad to write the book. I see an opportunity to help children, and not only children but also adults, to realize where we, the Mountain Jews, came from, who we are, what our customs, traditions are, and so on. It is an informative book. I hope not only children, but also adults will learn something new.”

From Dagestan all over the world