From Dagestan all over the world 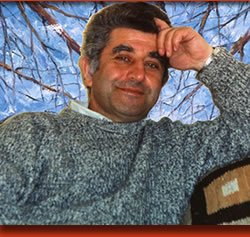 On April 8 at the Vernadsky State Geological Museum the exhibition was opened of Doctor of Technical Sciences, Professor, People's Artist of the Republic of Dagestan and Honorary Member of the Russian Academy of Arts, Benjamin Shalumov.

“I did not immediately become a painter, like professional artists who draw from childhood,” Benjamin Shalumov told Vestnik Kavkaza. “There was an incident when I was in the right place, at the studio of my daughter, it was in the U.S., where I saw the canvas, paint, and decided to try to paint something. Having finished, I thought that it was very interesting. My family supported me, I began to paint. So I gave up science and started painting, I realized that it is my business. I left science and switched to painting. This was about 15 years ago. There have been about 40 exhibitions worldwide. 25 of them were solo. So now I cannot live without this.”

Speaking about his homeland, the artists noted: “Dagestan for me is a special place, in fact. This began with Gamzat Gamzatov, who saw my work and really wanted me to write a series of paintings on Dagestan. I was there on a business trip. In Dagestan, Gamzat Magomedovich is an eminent person. And after spending a month in Dagestan, I created a series of works, about 50 works on Dagestan that went with me to travel the world. Of course, it was an action related to the praise of Dagestan, although in bad times, but Dagestan was not always in such disorder. And it is not all bad! There are traditions, there are people who live there, and I wanted to pass this on to others. I managed it in many exhibitions in many countries. I motivated people. Dagestan is a special case. I continue to paint, by the way. I am very often in Dagestan and continue to do the Dagestani cycle. I love it because I love my home town of Derbent. By the way, there was my solo exhibition dedicated to the anniversary of Derbent.”

“I've got works on Chechnya, on Pyatigorsk, several works,” Benjamin Shalumov says. “There are works on Azerbaijan. In the village of Cuba a series of works was painted. The South is very interesting for me, though I have to travel around many corners of the world, on different continents. And at this exhibition you see episodes connected to many places in the world - South America, North America, North Africa.

I have been many times in Azerbaijan, of course. It is located on the border with Derbent. I've got a lot of friends there and people of science, with whom I once worked very closely at the Institute of Physics of the Academy of Sciences of Azerbaijan. It was a period of science, the one that I did. I was engaged in very interesting science-related substances with supersensitive optical elements or materials related to electronics. For me, science was just as interesting as painting is now. That is, I switched to a different environment, and I continue to live as actively as I lived in science. In science, there were many difficult moments - PhD, Doctor, and so on. That's the story behind the science and painting.

You know, I'm a person who likes everything in nature. In the mountains, I am struck by the mountains, near the sea I am affected by the sea. I deal with everything with which I meet, which attracts me. And at this exhibition, too, you can see a lot of works with seascapes and mountains. Actually, I was more attracted to the mountains, because in my youth I was a mountaineer. And of course, the mountains for me really mean a lot, so I very often come back there now, to the mountains, to my past. Yes, I'm very fond of them.

Mountains everywhere are interesting. I was in the Tien Shan, on the ascent. The Caucasus Mountains are very interesting. In Dagestan they are very interesting, by the way, with the unusual structure of the mountains, very beautiful. Generally, Dagestan is such a beautiful part of the world, I can say this with authority, because I've seen a lot. Dagestan is beautiful, of course! No bad events should happen there. People do not realize what they are destroying, actually. Dagestan is a beautiful land. I appeal to the people to come to their senses and not to do what they are doing now. This is a terrible thing, of course, that there is such a confrontation in Dagestan, which never existed at one time. I'm of a fairly advanced age, I remember those days when there was peace. That was very important, of course.”

“An artist chooses what he wants. You never understand what an artist wants. I am very interested in nature. Nature in all its manifestations. Every landscape, every place awakes your desire to paint differently. A few years ago, it was in Hayhi, the philanthropist Amarik Halayev created a site for holding exhibitions and national songs. There has been a biennale, where I was in the jury and could evaluate the works of Dagestan. These were works from the North Caucasus. There are a huge number of talented guys, just a huge number. More than that, we, the jury awarded two prizes with a trip to England, where they were received at a special castle, where they can paint, and then make their shows with the sale of their works. I admire many of the artists of the Caucasus. I know a lot of Dagestani artists who are also lovely in different ways. That's what attracts me.”

“Benjamin Shalumov for years has gone hand in hand with the Artists' Union of Russia,” Evgeni Romashkin, People's Artist of Russia, says. “He has participated in many exhibitions, conducted by our Union. During this time he held a lot of solo exhibitions, for which he got the rewards of our union. He received the title of People's Artist of Dagestan. Also the Russian Academy of Arts has made him an honorary member. This high rank suggests that the creativity of Benjamin Shalumov is in demand for not only art lovers but also professionals. He seems to be recognized by his colleagues.”

“The exhibition, of course, is simply amazing,” Fatima Gamadova thinks. “There is such a flexible philosophy which shows his inner world - in every work you can find so much beauty, so much philosophy. This flexibility of his thought, his flexibility of mind reflected in the works, says a lot about the nature of man and his world view, the vast outlook. But in reality, each work suggests that you can simply get into a work. He has a lot of stories about his native Dagestan, a lot of mountains. Because he cannot, perhaps, help painting such works, as he was born there, grew up there. And indeed, when you look at the work, the feeling is created that for a moment you can find yourself there and then continue their journey by looking at these works climbing mountains, finding yourself at a river, hugging a tree. The liveliness and colors let you to pass through to the other side.”

“I see that Dagestan is very warm for the artist. It is clear,” artist Ghazali Dibir Izrailov says. “There is a shepherd, I was very interested. I have also climbed a lot in the mountains and made many studies. One can see his attitude, a very beautiful relationship.”

“He has come to this by himself. He just sees so many things and feels them,” artist Elvira Beshanaeva believes. “So he takes it on the canvas and makes such creations. This is a gift, a man whom no one has ever taught anything. It is just there, and he shares it with the world.”

“The exhibition of Benjamin Zavalunovich is called "In Search of Harmony", and looking at his works, you realize that he really has found harmony,” Zumrud Mugutdinova, Deputy Permanent Representative of the Republic of Dagestan under the Russian President, states. “Not only mental harmony, but also harmony in his works, harmony in the painting, harmony in colors. Of course, it is a unique phenomenon. Because he, by and large, began painting in 2002. He has very beautiful colors. Every work is very positive, there is absolutely nothing negative. Wherever he was, in a difficult republic, where there are a lot of challenges, everything he sees there is only positive and all the best. And he carries this positivity around the world. No matter where he is - in Germany, in America – he carries the culture of those people with him in different countries. And yet I found the reason why he has such incredibly beautiful, bright, positive colors. Because he worked for many years as chief chemist at the Ministry of the Chemical Industry and certainly knows some secrets. There were 40 general exhibitions in which he participated, 25 of them were solo. Of course, this is an amazing fecundity for an artist and great recognition. In 10 years he became a people’s painter of the Republic of Dagestan, which is the highest rank.”