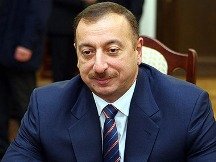 Hundreds of Azerbaijanis are known to have joined Islamic State (IS) forces in Syria. Concern is starting to build that these battle-hardened jihadists could one day set their sights on challenging President Ilham Aliyev’s administration in Azerbaijan. Some prominent militants now fighting in Syria, have already started verbally attacking the Aliyev government for its secularism and corruption, reads the article, published on the site of the US organization "EurasiaNet”.

The article reads that, Azerbaijan would seem to make an attractive target for IS jihadists. It is one of the few countries in the world with the Shia Muslim majority population, and the IS is virulently anti-Shia.

As it is noted in the article there’s no credible data exist on the number of Salafis in Azerbaijan today, but their presence is relatively strong in the Sunni-majority northern parts of the country, the capital city of Baku and the town of Sumgait.

The author writes that several factors explain the rise of Salafism in Azerbaijan.

First, the long legacy of official Soviet atheism warped the popular understanding of traditional Shia tenets. The Bolsheviks created a spiritual void and inadvertently paved the way for more extreme religious beliefs to fill it once the communist system collapsed.

According to the article, the rise of Salafism was also promoted by the Anti-Iranian policy of the Azerbaijani leaders since 1990s.

Throughout the 1990s and early 2000s, Azerbaijani authorities saw no reason to take action to check the spread of Salafism. If anything, they saw its proliferation as a healthy counterbalance to Iran’s efforts to export its influence to Azerbaijan.

According to the author, while pro-Iranian Shia elements have been openly critical of the Aliyev administration, Salafis in Azerbaijan have tended to emphasize loyalty to the government and have shied away from political activism.

It is noted in the article that nowadays Azerbaijani authorities felt the potential threat from the Salafis. But the solution of this problem is now much harder than it would have been ten years ago.

According to the author, the Aliyev administration in recent years has ruthlessly persecuted independent journalists and civil society activists, and the pace and scope of its crackdown has intensified in 2014. Over the same period, Baku has occasionally clashed with the United States and European Union, in particular Germany, over what Azerbaijani officials contend are the West’s "double standards” on human rights. These policies merely weaken Baku’s ability to address its most serious security threat, the author notes.

In Azerbaijan online activists are still hounded after presidential election

Azerbaijanis are hardened in Syria to be used in other conflicts