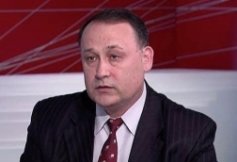 Russian Railways plans to build and electrify the railway from Iran to Azerbaijan, it was stated by Yevgeny Moskvichev, the head of the Russian State Duma committee for transport, commenting on the visit of Duma Speaker Sergey Naryshkin to Iran. The North-South transportation corridor would be a multi-modal route for passengers and freighting from Saint Petersburg to Mumbai (Bombay). The route would be 7,200km long and boost transit from India, Iran and other countries of the Persian Gulf to Russian territory (via the Caspian Sea) and further into Europe. Azerbaijan cooperates with Iran to connect each other’s railways, Trend reports. The North-South corridor will have a capacity of 20 million tons of goods a year.
Professor Alexander Gusev, the head of the Center for Strategic Development of CIS Countries of the RAS' Institute of Europe, has described aspects of Russian-Azerbaijani cooperation in an interview with Vestnik Kavkaza."We view Azerbaijan as a kind neighbour and partner in trade-economic relations. We are not indifferent to the situation developing in Nagorno-Karabakh, and we are attentively watching relations forming between Armenia and Azerbaijan. And Russia here takes a constructive position voiced by Russian President Vladimir Putin at a meeting of the three presidents in early August, when Ilham Aliyev and Serzh Sargsyan arrived in Sochi. To a great extent, normalization of relations between Armenia and Azerbaijan happened after the meeting. We remember the battles in late July – early August, when soldiers were dying on both sides. This cannot leave Russia indifferent,” says Gusev.In his opinion, the political relations between Russia and Azerbaijan "are undergoing a stage of dynamism and are built on the positions of business relations, pragmatism, taking into account each other’s interests. Our political relations develop regardless of the world political conjuncture, because we are old partners. Trade-economic relations gain momentum every year. Volumes of trade between our countries rise. We know products manufactured in Azerbaijan well. We sell large volumes of products to Azerbaijan too. And we have colossal opportunities to boost trade volumes. That is what we have set for the next years. I assume that the volume of trade turnover in the next 4-5 years may be doubled. There are all the necessary opportunities for that.Gusev opined that Moscow wanted Azerbaijan to join the Customs Union: "It would be very interesting for us. I remember some time ago that there was an opinion that Turkey, with which Azerbaijan maintains friendly relations, could join the CU. It would be nice if Azerbaijan did it before Turkey.”The expert does not want relations in the Islamic world to be neglected: "To a great extent, Azerbaijan decides the position of the Islamic world in the post-Soviet space today. We need to take this into account, because a huge number of people following Islam live on Russian territory. In this regard, we see great prospects, considering that the situation the Middle East is in, and Islamic countries, considering the actions of the Islamic State [terrorist organization], create a threat for Azerbaijan and Russia. In the face of common global threats, we need to unite, every one of us has such opportunities.”