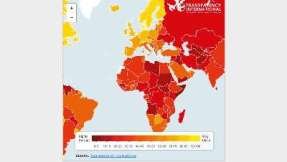 Azerbaijan in the annual ranking (http://transparency.az/korrupsiya-qavrama-indeksi-2014) Transparency International «Corruption Perceptions Index" ranked 126 out of 175 participants, scored 29 points. Last year, it was on 127 place among 177 participants, which means two steps back.

The study is carried out in the 20 th time and reflects the degree of corruption in the public sector on a scale from 0 (the highest level of perceived corruption) to 100 (lowest). So that the rate of Azerbaijan - far below average. Its neighbors with the same number of points became Togo, Gambia and Honduras.

The first three places in the ranking occupied Denmark (92 points), New Zealand (91) and Finland (89). In the last place is opaque North Korea and Somalia (both 8 points).

According to the founder of the Center for Economic Research Gubad Ibadoglu, the lack of progress the country's position in the "Corruption Perceptions Index" reflects the negative trends with corruption component. "Recently conducted surveys show that almost 85% of the local population believes that it is corruption - impediment to development. This is most clearly in sight during a flood in 2010, when the government allocated and on paper has mastered over half a billion manats (about $ 1 billion.), After which the active layers of the residents of Sabirabad, Salyan, Neftchala and Saatli using the Staff of civil society "Kura" initiated a series of lawsuits against the Ministry of Emergency Situations and local executive authorities, "- he said.

Over 80% of respondents are in favor of local surveys ratification of Article 20 of the UN Convention on the fight against corruption "illegal enrichment", which provides for the introduction of criminal penalties, if the official could not explain the origin of the money spent on the purchase of their property.