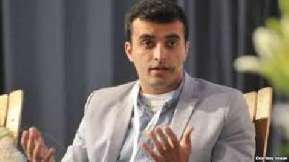 The arrested human rights activist Rasul Jafarov sent congratulations to colleagues on the occasion of December 10 International Human Rights Day. He called on the Azerbaijani authorities to release from prison civil society activists.

The text reads, "I heartily congratulate everyone on the occasion of the international Human Rights Day which is annually marked on December 10. The severity of the human rights situation in the country is well-known to everyone. There is a great need for such a difficult but honorable action as strengthening the civil society, releasing the political prisoners and securing the release of our compatriots' captured in Karabakh.

The recent developments in Ukraine (protests intensified after the adoption of a law restricting human rights) and the protests in the United States of America (president Obama acknowledged that there are some problems) once again proved that the problems concerning human rights should be treated with special attention, the problems should not be denied, on the contrary, they should be solved. Those, who raise these problems, should not be considered 'enemies', but goodwill persons who want those problems to be solved. These events also proved once again that the issue of human right is not an internal issue of any country. The reactions from international human rights community (including Azerbaijani NGOs and human rights defenders) to these issues and the calls made for their solution, as well as the allocation of grants and donations to goodwill projects by donors, who are part of this community, are a completely legitimate activity serving the humanity.

I call upon the Azerbaijani authorities to release the civil society activists. This is the only way that can lead to a real dialogue between the civil society and the government, which in turn can bring about a solution to the existing problems. "

It should be noted that on December 10 the Nasimi District Court will consider an application for release of Jafarov under house arrest.

Jafarov was arrested on 2 August. He was charged under Articles 192 (illegal business) and 213 (tax evasion) and 308 (abuse of power) of the Criminal Code.

On October 23 the deadline for his arrest was extended for another three months.