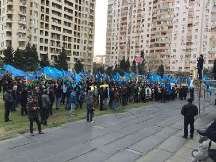 The stadium Mehsul in the Yasamal district of Baku hosted a rally demanding the release of political prisoners. The rally was organized by the party Musavat and was dedicated to the International Human Rights Day, celebrated on 10 December.

Despite the cold weather and strong winds the rally was attended by about a thousand people.
Speaking at the meeting, the former head of Musavat, now leader of the National Center for Thought, Isa Gambar said that the authorities are fighting totally against their opponents - those who speak the truth.
"The authorities are afraid, so they are trying to intimidate us with arrest," said Gambar.
However, as emphasized Gambar, the forces fighting for justice always eventually win.
"The people of Azerbaijan have the right to a fair, free and dignified life. I believe in the victory of our people and urge them to continue the fight," said Gambar.
At the same time, he recalled that already in the spring of 2014 Musavat decided that if the political prisoners were not released, the party would call for a boycott of the European Games in 2015.
According to Gambar, the authorities are moving all the faces, even jailing women, the human rights activist Leyla Yunus and the journalist Khadija Ismayilova.
Greed and gluttony of the Aliyev regime manifest themselves also on the issue of political prisoners, on the number of which Azerbaijan is one of the leaders in the world, Gambar further noted, adding that the country's prisons have more than 100 political prisoners at the moment.
An activist of Musavat, Raghif Kerimli, whose two sons, Faraj and Siraj were arrested, reported on pressure on political prisoners for the purpose of their writing petitions for clemency. "Freedom is not given as alms. These people are not guilty. Why should they seek pardon?" said Kerimli.
A former political prisoner and prisoner of conscience, human rights activist Vidadi Iskenderli expressed confidence that the government under international pressure will have to release political prisoners.
According to the head of the party Musavat, Arif Hajili, the number of people protesting against the existence of political prisoners and repression in Azerbaijan is not limited to the number of participants of the rally.
According to him, the Azerbaijani people resist repression and the number of prisoners is an indicator of that.
Simply, he continued, Azerbaijani people face a really cruel and ruthless regime.
Participants of the rally chanted "Freedom!", holding portraits of political prisoners and numerous placards with various slogans. So, they read: "Santa Claus, bring sanctions," "We must ignite not the torch of the Olympics, but the torch of freedom!" and others. On one of the posters the Olympic rings in an iron cage were drawn.
The rally ended with the adoption of a resolution with the following demands: to put an end to repression against democratic institutions; to comply with the rights and freedoms guaranteed by international conventions; to immediately and unconditionally release all "prisoners of conscience" and political prisoners.
The action took place without incident.