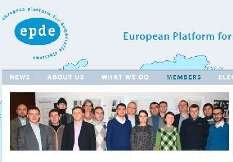 European Platform for Democratic Elections (EPDE) observes with great concern that a  number of states that are home to EPDE member organizations have not only regressed in the field of free and democratic elections, but also grossly violate human rights, continuing to harass civil society activists for their civic and human rights activities.

EPDE is deeply concerned about the systematic violation of social and political rights, politically-motivated persecution of democracy activists, community leaders, and human rights defenders, who are brought to criminal responsibility under fabricated evidence.

Moreover, the rights of political prisoners are being grossly violated during imprisonment, with frequent incidence of torture and other inhuman treatment.

EPDE condemns the frivolous and unlawful criminal conviction of Anar Mammadli, Member of the Coordinating Council of the EPDE and

EPDE also expresses its concern about the repression of independent monitoring organization and the mass arrests of prominent human rights defenders Leyla Yunus and Intigam Aliyev.

We regard such actions of Azerbaijani authorities as an act of retaliation against the prominent Azerbaijan organization for its independent, honest, and principled position in evaluating the presidential elections in Azerbaijan.

EPDE demands Azerbaijani authorities to immediately release all political prisoners and to allow for their full rehabilitation.

We encourage continuing any form of pressure on the Azerbaijani government with an aim of ending repression against civil society and other actions restricting citizen rights.