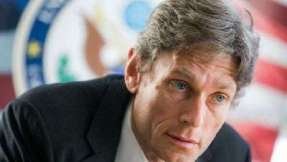 Tom Malinowski, Assistant Secretary of State for Labor, Democracy and Human Rights, was interviewed by an employee of the Russian service of Radio Liberty, Shahida Yakub, for the TV show Real Time on the situation in the former Soviet Union. Part of the interview was on Azerbaijan.

Speaking of human rights in the country, Malinowski said that in Azerbaijan, as in any other country, no one should be arrested for journalistic activities or freedom of expression. "We clearly brought to the attention of the Azerbaijani authorities that we want these people released, including the journalist for Radio Azadlig, Khadija Ismayilova.

To the question, if any effective measures are taken to release these people, Malinowski said that this discussion is conducted at the highest level. "They need to understand that stifling civil society, they jeopardize the US-Azerbaijani relations," said Malinowski.

When asked what additional interventions besides statements about "deep concern" will be taken against the authorities of Azerbaijan, and what else should happen to let the declarations turn into action, Malinowski did not give a specific answer. "Now I can only say that for 20 years the US had good relations with Azerbaijan. Sometimes there were differences on various issues, including human rights. However, we always seek solutions to problems, so it is difficult to understand the events happening in Azerbaijan in recent months. These actions call into question our relationship. During consultations with the Azerbaijani authorities, we are trying to bring them to this in a simple form.

To the question, what are the expectations of Malinowski and whether the detainees will be released, the Assistant Secretary of State said he did not know exactly when it will happen. "My job is not prediction, but implementation. Now our next steps depend on the authorities of Azerbaijan," said Malinowski.