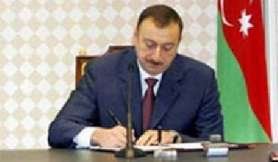 The Azerbaijani President Ilham Aliyev has signed a decree to pardon 87 prisoners. Of these, 79 are released from prison, three people released from correctional work, and five people from fines.

Jafaroglu called "normal" this pardon. "This is the first result of the joint working group on human rights. The process will not stop. We will try to obtain the release of all political prisoners," said Jafaroglu.

The head of the NGO "Centre for Monitoring of political prisoners" Elshan Hasanov, told Turan noted that "the release of even one innocent convicted person is to be welcomed."

"Unfortunately,  they free some and arrest others. Pardon is held against the backdrop of the continuing repression. Recently was arrested an employee of "Radio Liberty" Khadija Ismayilova, and  the office of this radio in Baku was sealed. Editorial staff is detained for questioning by the prosecutor's office.  The release of ten out of a hundred political prisoners does not change the depressing picture of a total of repression and suppression of fundamental freedoms," Hasanov said.