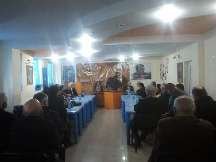 A roundtable discussion on the upcoming parliamentary elections to be held in November took place at the initiative of the Thought Center at the headquarters of the Musavat party on January 15. The head of the Center, Isa Gambar, proposed the idea of functional cooperation of Democratic Forces for free elections without creating any coalitions. "Our goal should not be only winning seats in Parliament, we have to make serious democratic change in the country," he said.

According to him, very important becomes the position of international organizations such as the Office for Democratic Institutions and Human Rights, the Venice Commission, which must themselves act in the framework of international commitments in relation to Azerbaijan, and to invite to this process the authorities.

The main theses of the speakers were on creating the conditions for the expression of the will of citizens and their activity in the upcoming elections. The activation of the population and creating interest in the elections becomes the main point of the agenda. "We need to work with people to convince them that the election is a chance to change the situation in the country," said Natig Jafarli, one of the leaders of the REAL Movement.

In this regard, the Chairman of "Aydinlar", Gulamguseyn Alibeli, noticed that the democratic forces are late, because the authorities have launched a campaign since last year. Chairman of the Musavat party Arif Hajili agreed with him, and called the main task of the Movement the creation of an atmosphere of elections.

For democratic elections Hajili called four factors: democratic environment, democratic legislation, equal opportunity to compete, and preventing fraud. "To achieve this, functional cooperation of the opposition is required," he said, supporting the idea of Gambar.

He said that consultations on this issue with the parties in the framework of the Inter-Party Center for Human Rights, with the Karabakh Bloc have already begun. "I have met with the chairman of the Popular Front Party Ali Kerimli, the REAL Movement is also interested in such cooperation," said Hajili.

He called in 2015 - a year of opportunities. "To implement our goals are necessary mass protests as a tool for creating pre-election atmosphere, and in March we will start our rallies," said the head of Musavat.