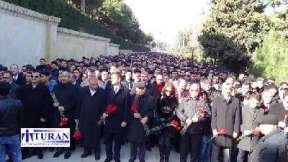 Azerbaijan is on a mourning day. In the morning, despite the freezing weather, sleet and strong winds, thousands of people went to the Alley of Martyrs to commemorate the victims of January 19-20,1990.The ceremony was attended by President Ilham Aliyev and other senior officials and diplomats, who traditionally expressed their condolences to the head of state.

Alley of Martyrs will be also visited by members of the opposition‘s Public Chamber. The mosques of the country hold the ceremony of commemoration of the victims of Black January.

On the TV channels there is no entertainment on this day. In the Baku Metro funeral melodies are sounded, and the stations and escalators are decorated with red carnations.

25 years ago, the invasion of Soviet Army units to Baku resulted in numerous civilian casualties. On the night of 19 to 20 January 1990 on the orders of the then leadership of the USSR, 35,000 military men were deployed in Baku. The action was to save the Communist regime in Azerbaijan and to suppress the national liberation movement.
This barbarous operation was developed and implemented by the Ministry of Defense, the Interior Ministry and the KGB and was code-named Strike. The key role in the operation group was assigned to the special force Alpha and subversive groups of the KGB.

One of the justifications for the invasion was pogroms against Armenians last January 13-15, but by the time the troops invaded they ceased. As a result of the occupation of Baku, 134 civilians were killed and more than 700 people were injured.

Note that this year's official propaganda calls the main culprits of the tragedy the leaders of the former USSR, and, in particular, President Mikhail Gorbachev. At the same time, they have markedly decreased criticism of the then government of the republic. Whereas in the previous years, as one of the culprits of the tragedy, they named Ayaz Mutalibov, the then Chairman of the Council of Ministers (and after the tragic events the first person in the country), now they do not say that. Perhaps this is due to the "rehabilitation" of Mutalibov. Last summer, he was able to come to Baku to attend the funeral of his son, and the entry into force of the law on ex-Presidents will let Mutalibov finally come back from years of exile.

Note that none of the government of the former USSR and Azerbaijan SSR has been brought to justice for the tragedy.

The Prosecutor General of Azerbaijan on February 14, 1992 filed a criminal case under several articles of the then Criminal Code: 94 (premeditated murder under aggravating circumstances), 149 (intentional destruction of property), 168 (abuse of power and authority), 255 (use and abuse of power).
After Heydar Aliyev’s coming to power in Azerbaijan, the country's parliament gave political and legal assessment of the January events. Responsibility for this was given to the former Soviet leaders, including Mikhail Gorbachev, the former first secretary of the Communist Party of Azerbaijan SSR Abdurahman Vezirov and the Chairman of the Council of Ministers Ayaz Mutallibov. At the same time, the name of Eugene Primakov was removed from the list of culprits of the tragedy.

On the eve of the 20th anniversary of the January tragedy the Azerbaijan Prosecutor General's Office issued a message. It says that the Attorney General of the USSR, which conducted the initial investigation, said there was lack of corpus delicti in the actions of the soldiers and stopped the investigation. The Russian law enforcement agencies were sent requests to transfer the briefs on the case to Azerbaijan, as well as to extradite the accused persons. However, the Russian side has not answered.
Note that the representatives of the Azerbaijani opposition periodically declare that some of the perpetrators of the January tragedy are still in power now. In particular, it points out that the telegram asking Moscow for sending troops was signed by the then Deputy Prime Minister and current Prime Minister Arthur Rasizadeh.