Residents of the village of Nardaran burn the flags of France, Israel and the US 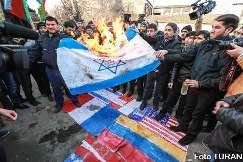 Protesters in Nardaran on Wednesday condemned the cartoons of the Prophet Muhammad, describing it as an insult to Muslims and Islam in general. They called for the Azerbaijani Foreign Ministry to express their attitude to  the insult the Prophet. During the event, which was attended by several hundred people, sounded the slogans: "Death to Israel", "Death to America", "Death to France", "Death to Germany", "Death to Denmark."

Then, demonstrators set fire to the flags of France, USA, Israel and Armenia.

Speakers at the rally denounced the US for "double standards" and support for separatists in Nagorno-Karabakh.

Nardaran residents are confident that under the leadership of the leader of Iran, Ali Khamenei, Muslims will win.

The protesters expressed their solidarity with a similar protest against cartoons on the Prophet organized a few days ago by  the  "Sunni brothers".

It was noted that the attack on the editorial office of  Charliu Hebdo, as well as the publication of new cartoons of the Prophet were a deliberate provocation against Islam.

The action took place without intervention of  law enforcement  agencies.

Several hundred people today hold a rally in the village of Nardaran to protest against cartoons of the Prophet Muhammad in the French magazine Charlie Hebdo and other Western media. Participants of the rally were holding posters with the slogan "Islam is not defenseless," "France is afraid of Islam", "Long live the Prophet!" and other religious slogans.

In this case, at the feet of the protesters thrown the flags of France, Israel and the United States.

The protesters threw down the flags of France, Israel,  and the USA, and put in their hands religious flags and flags of Azerbaijan.

Although the action was not coordinated with the authorities,  police did not intervene.

Around the Imam Hussein Square, there are policemen at all. One of the elders of the village, Mashadi Natig Karimov, told Turan, that Nardaran residents are protesting against the insults of the Prophet,  and demand respect for the feelings of believers.

At the same time, he condemned the attack on the journal Charli Ebdo.

"We, as Shiite Muslims, are against any terror. What makes "LIH" has nothing to do with Islam. However, we strongly condemn and insult our holy, " said Kerimov.

Protest in front of the Israeli embassy

Brutal killing in Mosque in Azerbaijan: a man stabbed to death