Protest in front of the Israeli embassy 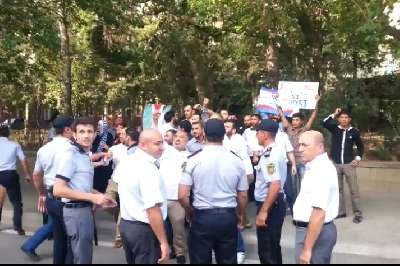 A protest on the occasion of Gudsa (Jerusalem) took place on Friday morning in front of the Israeli embassy in Baku. This day is celebrated annually on the last Friday of the month of Ramadan as a sign of Muslims in solidarity with the Palestinian people, and demand to liberate Jerusalem.

The action participants chanted outside the Israeli embassy "Stop the massacres in Gaza", "Death to the Israeli regime that commits international crimes».

However, as soon as the action began police began to disperse the crowd, and arrested two dozen people. They were taken to Police Offices N 26 and N27 in the Yasamal district police. Among them is the leader of the Islamic Party, Elchin Manafov, and his deputy for organizational issues, Vugar Ibayev.

According to Akif Heydarli, the deputy chairman of the IPA for Political Affairs, the rally was attended by about 100 people, and many of them were detained. According to him, the detention began before the start of the action.