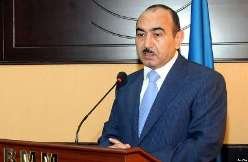 «No one can teach mind, teach lessons in democracy, forcibly implement their postulates and subjective opinion," stated by head of the Presidential Administration of Azerbaijan Ali Hasanov, commenting on the recent debate on violations of democracy in Azerbaijan, organized in Washington.

Then  he began to shame those who were present at the hearing ", together with representatives of the separatist Nagorno-Karabakh." Speaking on Thursday at an event dedicated to the results of the Council of State Support to NGOs, Hasanov urged to condemn the participants of the event.

"Some argue that the Azerbaijani authorities want to revenge some NGOs and anti-Azerbaijani forces. This is not so, the talk is about a public reprimand," he said.

"No one can say that in Azerbaijan people are persecuted for their political orientation, for the attitude to the authorities, and on this basis they are denied grants,"  he said, adding that "the activities of NGOs in Azerbaijan is probably the most exemplary in the world" .

Hasanov said that the initiative of the Council of State Support to NGOs was  analyzed the activities of the third sector in the Western countries and the state of human rights. Hasanov called this analysis example of objectivity, "and not an attempt to manage someone, exert pressure, change the national interest."

Concerning the role of NGOs, he said that, since 2008, the NGOs implemented through  the NGO Council  more than 2,000 projects totaling $ 20 million manat. Today, 3,000 NGOs were regstered  in  the country, Hasanov said.

It is not the first year  that the main ideologist of the authorities calls for "public censure" of the social forces, political parties, civil society activists and others who, in his opinion, does not serve the national interest of the country.