Baku canceled property agreement with the U.S. Embassy amid criticism of the 2013 elections 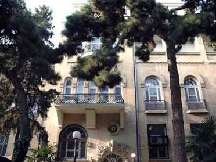 The Azerbaijani government has canceled a signed property agreement with the U.S. on construction of a new Embassy building in Baku.  The move came months ago, "just after Washington criticized the 2013 election,” TURAN’s U.S. correspondent was informed by the diplomatic sources.

In its response, Washington sent a letter from Secretary John Kerry to President IlhamAliyev in February 2014 urging for cooperation, according to the newly published State Department Inspection report, which took place in Washington, DC and Baku between April-May 2014.

The mission’s top management priority was construction of a new embassy building to replace the overcrowded and physically vulnerable 100-year-old chancery and a separate commercial annex 1 mile away.

"The embassy’s 100 -year-old physical structure is in deplorable condition, despite the best efforts of a hard-working management section… The Government of Azerbaijan has repeatedly blocked embassy efforts to acquire a site for a new embassy compound. The embassy continues to pursue options vigorously,” reads the report.

According to the source, the U.S. criticism of the flawed 2013 elections — and of subsequent legislation curbing Azerbaijani civil rights — ‘irritated the Aliyev Government.”

In the meantime, the reports mentions that despite troubling trends toward authoritarianism and a recent crackdown on dissent, Azerbaijan has remained an important partner in U.S. security efforts in the region, providing transit, logistical, and combat support for the NATO mission in Afghanistan and working with the U.S. to counter terrorism and nuclear nonproliferation from Iran.

"Although Azerbaijan has made some progress in economic reform, the U.S. has been critical of developments in other areas, particularly civil governance and human rights,” reads the report: "The [U.S] Embassy efforts to encourage the government to improve Azerbaijan’s democratic and human rights record have been stymied by a crackdown on dissent and civil society that has become more pronounced in recent months… Mission efforts to engage constructively with officials of Azerbaijan’s authoritarian government became more difficult after the elections, even in areas of mutual interest.”