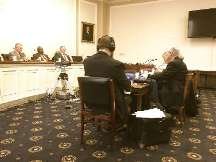 Azerbaijan’s location in a difficult neighborhood and being sandwiched by Russia and Iran "shouldn’t be an excuse for ignoring right volitions,” said Dana Rohrabacher, Chairman of House Foreign Affairs Subcommittee on Europe, Eurasia, and Emerging Threats, during a hearing about U.S. interests in Azerbaijan.

"The recent closure of RFE/RL in Baku is unacceptable,” he said, adding that an official raid to the RadioAzadliq office, as well as arrests of local journalists are among a series of steps by the Azerbaijani government to limit free media and public discourse.

"I’m deeply troubled by recent efforts by the government to crack down on civil society groups and independent media…Democracy does not exist without the citizens who freely exercise their voices,”added New Jersey Congressmen Albio Sires.

Gregory W. Meeks, a Democrat from New York, said, President IlhamAliyev and his team "should know that we’re concerned about their attitude towards some members of the civil society.”

The Azeri government officials, including ambassador to the U.S., weren’t part of the hearing, however, the embassy employees and pro-government media were observing the event from the audience.

In his speech Massachusetts Congressmen William Keating also highlighted the arrest of journalists in Baku, as well as ongoing anti-US campaign, saying that these all "raise serious questions and concerns over the intentions of Azerbaijani leadership and desire to partner with U.S.”

The [Obama] Administration, he said, "should prioritize those concerns while their communication with the Aliyev government.”

Congressmen Rohrabacher also criticized U.S. diplomats in Baku for allegedly declining to assist to activist EminHuseynov, who is married to a U.S. citizen, who is currently being sheltered by Swiss diplomats in Azerbaijan’s capital. Huseynov’s wife Sarah Paulsworth, was present at the hearing.

Crackdown is counterproductive and dangerous

In her testimony Dr. Audrey Altstadt from Kennan Institute, said that Azerbaijan today "is not a democracy” thus the government has been moving away from, not closer to, pluralism and democratic elections.

And the US and its representatives, she said, "must be unapologetic about our commitment to human rights and democracy.”"The US owes this much to the pro - democracy movements and groups in Azerbaijan. "

Critics of the Aliyevregime are "harassed or go to jail,”she said. The trend accelerated in 2014. There are about 100 political prisoners in Azerbaijani jails including human rights defenders, journalists and lawyers. Altstadt called the crackdown "counterproductive and dangerous.”

"The pressure on opposition groups and critics, especially youth, both in and outside political parties, and on NGOs, has gradually increased since the 2003 accession to the presidency of IlhamAliyev, son of the previous president and former KGB general HeydarAliyev. Since early 2013 the instances of such repressions have increased in number and intensity reaching unprecedented levels since the spring of 2014.”

End of the HeydarAliyev era…

In his speech Richard Kauzlarich, former U.S. Ambassador to Azerbaijan, said the Mehdiyev attack on the U.S."represents the end of the HeydarAliyevera – an almost two decade long effort by both the U.S. and Azerbaijan to improve relations despite differences,”

During that period, he said, there was a public profession from the Azerbaijani s ide of cooperation with the US and support for internationally recognized standards for democracy and observance of human rights.

"Many observers have noticed deterioration in the tone and, in some respects, the substance of US – Azerbaijan relations, especially since the flawed Azerbaijani presidential elections in the fall of 2013. Part of this reflects fundamental shifts in the global and regional political and economic environment,” he said.

For the Ambassador, today U.S. and Azerbaijan are in a different place than just five years ago. There are new global and regional geopolitical realities. The global energy picture in particular has changed making Azerbaijan and the Caspian region less critical to U.S. energy security needs.

Rather than trying to construct an abstract "strategic partnership,” Washington, he said, needs to establish a limited set of attainable goals: "Progress on these goals would determine whether a strategic partnership between the US and Azerbaijan is realistic.”

- Serious engagement between Armenia and Azerbaijan by a specific date leading to a peaceful settlement of the dispute regarding Nagorno-Karabakh, and resumed Track - II unofficial contacts;

- Support for stability in Azerbaijan based on Baku’s movement toward greater democracy and observance of internationally recognized human rights standards;

- Freedom for the over 90 political prisoners;

- Further internal suppression of the remaining liberal democratic elements in the run - up to the 2015 Parliamentary elections in Azerbaijan.

On the human rights front, he said, there are more political prisoners in Azerbaijan than in Belarus and Russia combined. Years of diplomatic engagement have not improved the situation.

"Recently it has become markedly worse than anything I have observed in my experience with Azerbaijan. If there is no progress toward release of all these prisoners then the USG should consider imposing travel and other sanctions on those officials responsible for the arrest and continued detention of NGO activists and journalists,” he said.

For Altstadt the year 2015 will be pivotal for the coming 5 years in Azerbaijan and in US - Azerbaijani relations.

"Azerbaijan must maintain friendly relations with its neighbors and commercial partners. Recent signs suggest that the regime, or at least some people among the power elite, is trying to bring the country closer Russia in foreign policy and in the handling of domestic criticism,” she said.

"Many historical examples show that without official governance mechanisms for the redress of grievances or civil society space for discussion of problems and debate over solutions, people turn to radical actions and sometimes also to radical leaders. Demonstrations become likely and if the police crack down on them, people will become more belligerent and a " Baku Maidan” can begin.”

Speaking to TURAN after the event, Cornell said the hearing was"an indication that there is a growing understanding of the difficulties in the U.S.-Azerbaijani relationship and a need to work with the Azerbaijani government and with other forces in Azerbaijani society to improve this relationship.”

"There have to be steps from the both countries, but in the end of the day, the US is the superpower and it has to take a step,” he said.

In an interview with TURAN Ambassador Richard Kauzlarich said, it’s not that something has changed on the U.S. side, it’s the steps that Azerbaijan "unfortunately has taken in recent months.”

"There have been a number of specific actions that the government has taken recently, unfortunately on the negative side brought attention to Azerbaijan...” he said, reminding of the large number of political prisoners,as well as shut down of RFE/RL and other actions.

Commenting on Azeri officials’--most recently Ali Hasanov’s-- statements that there was no problem between the two countries, Kuazlarich said below:

"I always follow very carefully what Ali Hasanov says; but in this case I think he needs to read the paper that RamizMehdiyev wrote… Because that is a definite problem: I cannot recall – in my experience on the ground or since coming back here – that a senior Azeri political figure has attacked the U.S. in writing, accusing us of formatting a color revolution and creating 5thcolumn in Azerbaijan,” he said.

US House Committee to Hold Hearing on Azerbaijan