What a Trip: Georgian wine and the spirit of love on a vacation to the Caucasus 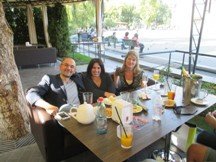 Our readers share tales of their rambles around the world.

Who: Vivian Vasallo of Washington (the author) and Jennifer Kerslake of New York.

Where, when, why: My Bosnian friend Adnan announced in June he was marrying a woman from Armenia in that country’s capital, Yerevan, in October. A destination wedding near Georgia, the birthplace of wine: What better reasons to go?!

Highlights and high points: Before the wedding we spent a week traveling through Georgia. We hired a private driver and guide through Caucasus Travel and — given the condition of some roads, absence of road signs and language barrier — this was a fabulous decision. Our guide, Magda, was a terrific resource for all that we saw as well as an able translator.

We also explored the oldest wine region in the world, Kakheti, where more than 8,000 years ago Georgians cultivated wine and developed a unique production method, the Kvevri clay jars.

In Armenia, Wedding Armenia managed arrangements for the 100-plus wedding guests, including visits to a monastery, jazz club and art gallery. The bride, Armine, did a fantastic job hosting an entire week of events and sharing her culture with all of us.

Armenia was the first nation to adopt Christianity as a state religion, and churches abound. The wedding itself took place at Zvartnots Cathedral, a seventh-century ruin. The backdrop was Mount Ararat, the place in the Book of Genesis where Noah’s Ark came to rest after the Great Flood. At a wedding with friends and family of more than 25 nationalities, and surrounded by such historical significance, one realizes that despite so much war and upheaval in the world, love still can conquer all!

Cultural connection or disconnect: English is not widely spoken in this region, although younger generations are learning. My Bosnian friends helped translate on many occasions, speaking Serbo-Croatian dialects that were mostly understood by the Georgian/Armenian/Russian speakers. In Georgia, our guide spoke English but our driver did not. We mostly communicated with him over shared lunches and beer or wine at the end of the day. There were also several wedding guests from different backgrounds. English was the common language, but so, too, were cognac and coffee, national Armenian pastimes! The Caucasians are extremely hospitable so even if we didn’t share language, we were always well cared for.

Biggest laugh or cry: The wedding planners organized an 8K hike in Dilijan, approximately two hours from Yerevan and known as the Armenian Switzerland. The national park is home to many hiking trails and picnicking spots. It was peak foliage season and absolutely stunning. Although ours was billed as an "easy” hike, it had recently rained, and we found ourselves navigating a few miles through mud. We had been concerned that our elderly guests might not be able to navigate as well, yet we ended up the dirty and exhausted ones!

I’m not sure if this was a laugh or a cry, but we visited the Joseph Stalin Museum in his birthplace of Gori, Georgia. It was surprising that many in Gori are still proud of their native son. The museum, dedicated in 1957, has not changed much over the years. The museum building is a large palace in Stalinist Gothic style, complete with a clock tower. Stalin’s birthplace is in front of the museum, and his rail carriage is on one side. Most of the exhibitions are dedicated to his revolutionary exploits and victory over the Nazis. There is little mention of Stalin’s purges, labor camps or other atrocities.

How unexpected: When Adnan told me he was getting married in Armenia, I confess I had limited knowledge of the region. I was pleased to learn about the area’s rich Christian history and to see so many monks and nuns. It was comical, though, to see a monk who lives in a fourth-century dwelling carry a smartphone!

We were also taken by the breathtaking landscapes. Driving to the David Gareja monastery complex in Georgia felt like being on the moon. It is a hewn-rock complex on desert slopes. An unpaved road leads you there with nothing, absolutely nothing, for several kilometers around.

The cities were also captivating. Tbilisi, Georgia, surprised me as a romantic city with houses clinging to the Kura River cliffs, latticework balconies, relics of the Ottoman Empire and grandiose modernist architecture. It is said that Persians, Byzantines, Ottomans, Russians and Soviets have all had an influence.

Fondest memento or memory: The wedding couple originated from different countries and had lived abroad, where they cultivated special friendships over the years. We met people from all corners of the world and discovered that some of our new friends live only a few blocks away. My memories of this trip include the sights seen and the friendships — old ones strengthened and new ones formed. And those memories are the souvenirs of a lifetime wherever we go, be it D.C. or New York City or Myanmar or Norway or Argentina or Bosnia or Armenia. Those friends will be there to share in those memories over a coffee, cognac or Kakheti wine!