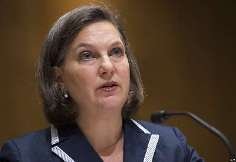 As officials in Baku and Washington remain silent over bilateral agreement in their response to ongoing crackdown against civil society and western institution in Azerbaijan, analysts urge the Obama Administration to refrain from action under uncertainty.

The agreement on creation of a bilateral U.S.-Azerbaijani dialogue on civil society and democracy was announced by Assistant Secretary of State Victoria Nuland during her trip to Baku early last week.

"We agreed to continue consultations on this [human rights situation and problems of the media] and strengthen them through the US-Azerbaijani dialogue on civil society and democracy. It is about creating a bilateral structure, which will run in parallel with the structures of the Council of Europe," Nuland said following her meeting with President Ilham Aliyev.

It remained unclear though whether the establishment of a new commission was Baku’s initiative, or "State Department is pushing the idea in an ethical and public relations vacuum, unaware of the minefield that it is walking into,” a veteran Eurasia watcher in the U.S.told TURAN’s correspondent speaking on condition of anonymity.

"Let’s assume the former for the moment, and ask what the real purpose of the commission might be,” he said. "My guess is that it is designed to provide a formal mechanism for the Azerbaijani government to justify the release of at least some political prisoners under the guise of an objective, rational examination of international norms... In other words, the Aliyev government could release a substantial number of prisoners without looking like they were cajoled into doing so by a foreign partner. They save face while the Americans can claim that the problem is being addressed.”

However, said the analyst, there are a host of potential problems here, not the least of which is that if the government does not release all or the vast majority of those activists and journalists now sitting in prison, the U.S. government will be seen as an implied accomplice – not to mention complicit in any further arrests after the commission has been established.

The potential for blowback for the US, already damaged amongst progressive elements in Azerbaijan, is "enormous,” he said.

"In the last few days, I have talked to several Azeri opposition figures – all of whom have mentioned a similar mechanism that already exists: the Joint Working Group on Human Rights Issues, which was set up in cooperation with the Council of Europe. And my Azeri contacts have stressed that the Joint Working Group has failed to achieve significant success in getting defendants released while the Azerbaijani government has continued its harassment of human rights advocates and journalists,” analyst said asking why the US would now seek to duplicate the efforts of a structure that is already compromised in the eyes of many is thus puzzling.

"Contributing to the general astonishment on the part of Azeri activists is the twenty minutes Ms. Nuland deigned to spend with three civil society figures. Twenty minutes? That’s less time than it takes to have a couple of piroshki at Chudo Pechka. It’s almost insulting,” he said.

And in the midst of all this, he added, "the arrests and convictions continue. "

The court system just handed down a guilty verdict against Khadija Ismailova in a libel case, and the brother and father of Tural Sadigli, the Musavat activist who lives in Germany, were recently arrested on charges that everyone knows are manufactured. As soon as Ms.Nuland left Baku, the pre-trial detention period for Leyla and Arif Yunus was extended for an additional five months, and Jamil Hasanli’s daughter was sentenced to one and a half years in prison for a traffic accident.

The next day, former RFE/RL Baku bureau chief Babek Bakirov was prevented by authorities from boarding a plane at the Heydar Aliyev Airport.  And early this week local rights activist Taleh Hasmammadov was arrested for assault.

In such an atmosphere, "it is difficult to take the proposed "bilateral human rights structure” seriously,” said analyst adding that whether the State Department insists on walking blithely into this trap of its own making is unclear, but "one hopes that voices inside the US government who have a deeper understanding of the situation in Azerbaijan will have a chance in the coming weeks to rectify what looks like an ill-considered blunder.”

Speaking to TURAN another U.S. analyst who closely follow Azerbaijani policy mentioned that Aliyev government’s anti-Western mythology is "now so widespread that many in Baku and some in the West accept it while failing to understand how dangerous and self-destructive it is for those who are putting it about.”

There are two reasons for that conclusion, she said. The first reason is that "this mythology is based on serious exaggerations and lies which disorient Azerbaijan in its own regional position and foreign policy actions.”

Second, she said, Azerbaijan will only suffer if it turns away from the West as a strategic partner. "When our real and natural competitors, Iran, Russia, identify the gap between Azerbaijan and the West they can play a very evil joke on [Azerbaijan].”