R. Secuta: We Are Our Biggest Critics 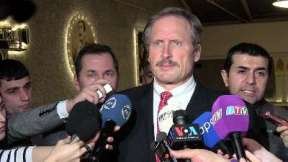 Azerbaijan has started the festival Days of America, which was opened at the American Center of the University of Languages on March 10.

Speeches were made by the US Ambassador to Azerbaijan Robert Secuta and the university rector, MP Samad Seyidov.

Seyidov in his speech spoke about the continuous development of diplomatic and cultural relations between Azerbaijan and the United States. According to him, the most important of all languages is the language of democracy, humanity, culture and education. The art works demonstrated at the exhibition will enhance the credibility of America and bring closer the two countries.

US Ambassador Robert Secuta noted that the festival aims to present samples of American culture, and to bring together the peoples of the two countries.

The same evening, the ceremony continued in the Nizami Cinema Center with the participation of members of the public.

In his speech Secuta noted the need to expand business ties between the two countries, relations between journalists, scientists, artists and public figures.

"Azerbaijanis visit America. We wish to strengthen contacts between ordinary citizens, they should be acquainted with the culture and history," he said.

"We are united by our shared values - tolerance and patience," he continued. The diplomat added that the greatest manifestation of the patriotism of Americans is their self-criticism. "We become stronger through questions that we ask ourselves. The most severe critics of America are we ourselves," said Secuta.

The festival Days of America will last until March 14. The festival will sound musical performances, show examples of American cuisine, hold art exhibitions, show movies, dancing Indians, and programs for children. The main part of the program will be held in Baku. All the events are open to the public.