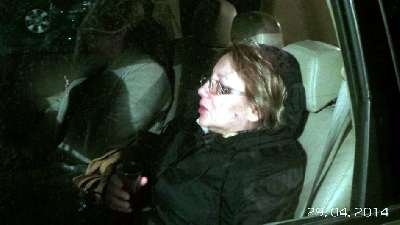 For a long time I have not been writing. I have been imposed a tight ring, as they fear my words more than bullets.

Well, we both have been extended the term of imprisonment until August (exactly a year since the arrest).

Now I understand and know their plans: we will be held in jail until the trial at the end of 2015, and then a circus trial will take place - given the judgment, and a whole bunch of the articles hung, they will give us from 10 to 15 years.

I with my experience understand all clearly...

Scary? Scary. It is very scary that we will not be together - you, me and Dinara.

Who supports me? On the one hand, V. Shalamov, on the other – A. Solzhenitsyn.

I know you have Order No 227 and Chuikov next to you.

We were given the infamous Article 58-6 (espionage), which fully revives the spirit of Stalinism...

But they were young. Solzhenitsyn was 27 years old when arrested, and we are 60...

Pericles finally realized the shamefulness of holding the Olympics in jail! Games were played, but the spirit of Pericles was against the use of the term Olympic...

Dinara has given all this information in an interview with the First Channel of the Dutch TV.

By the way she regularly speaks in the European media and on TV.

People already recognize her in the street and come up to her, expressing admiration for our family...

On February 23 Dinara registered the Institute for Peace and Democracy in the Netherlands.

Now our IPD led by Yunus (!) will continue to work in partnership with the leading human rights organizations in the world...

Arif, my dear! We've been together for 37 years. It is very hard without you… But we have already found our place in history...