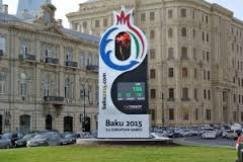 GENEVA — With the opening of the inaugural European Games in Baku 100 days away, human rights groups on Wednesday called on host nation Azerbaijan to release political prisoners held on "trumped up” charges.

The European Games run June 12-28, and are widely seen as trying to soften the authoritarian image of Azerbaijan under President Ilham Aliyev.

"At least 22 prisoners of conscience are currently languishing in prison or in detention in Azerbaijan awaiting trial following trumped up charges ranging from fraud and embezzlement to abuse of drugs and even treason,” Amnesty International said.

Aliyev’s wife, Mehriban Aliyeva, was attending a gala event in Rome on Wednesday to mark the 100-day countdown.

"European leaders should convey to Baku that they will not send high-level delegations to the opening ceremony unless those wrongly imprisoned are released and the crackdown on dissent ends,” the rights group said in a statement.

More than 6,000 athletes from across Europe will be competing in 20 sports, including some which offer qualifying spots for the 2016 Olympics in Rio de Janeiro.

"No one should be fooled by the glitz and glamor of the international show Azerbaijan is putting on to portray a squeaky-clean international reputation and attract foreign business,” Amnesty regional director John Dalhuisen said in a statement.

The Baku organizing committee distanced itself from political questions.

"The Baku 2015 European Games Operations Committee is a sports organization preparing a sporting event, so it would not be appropriate for us to comment on what is clearly a political issue,” it said in a statement to The Associated Press. "At Baku 2015, we are entirely focused on delivering a world-class sporting event in June.”

The European Games is among a series of sports projects in Azerbaijan.

The national stadium, which stages the opening ceremony of the games, will also host four matches at UEFA’s 2020 European Championship.

Baku bid for the 2016 and 2020 Olympics but failed to make the short list of finalists. The Azerbaijan Olympic body, led by President Aliyev, is considering a possible bid for the 2024 Olympics.

Copyright 2015 The Associated Press. All rights reserved. This material may not be published, broadcast, rewritten or redistributed.