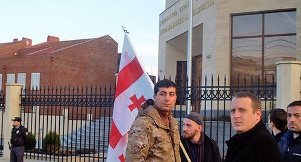 Today, the Tbilisi City Court has acquitted Parnavaz Chkadua, an activist of the NGO "Free Zone", who had been detained by the patrol police during a mass brawl in front of the Parliament of Georgia.

The "Caucasian Knot" has reported that on March 12 a brawl broke up in front of the Parliament of Georgia, where the participants were activists of the NGO "Free Zone", who support the "United National Movement", the party of Mikhail Saakashvili, and members of the NGO "Free Generation", who are political opponents of the ex-president of Georgia. The police detained several participants of the incident.

Parnavaz Chkadua, an activist of the "Free Zone", was one of the detainees, who had been repeatedly detained and exposed to administrative penalties.

As asserted by his colleagues, the video of the detention, which was widespread by the "Free Zone", clearly shows that Parnavaz Chkadua was standing in one place and filming everything what happened without conflicting with anybody. According to their version, at that moment he was approached by a policeman and announced his detention, after which Chkadua rendered no resistance and sat into a patrol car. The activist was taken to one of the city's departments of the Ministry of Internal Affairs (MIA).

On March 12, all the detainees were fined by 100 laris for their alleged administrative violations – for participating in the brawl and public insults.