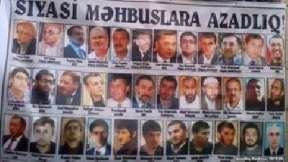 Most pardoned by the last order of the President of Azerbaijan are perpetrators of serious crimes that did not serve even a third of their punishment, the head of the Public Alliance Azerbaijan without Political Prisoners, rights activist Oktay Gyulalyev wrote on his Facebook page.

March 18, Azerbaijani President Ilham Aliyev signed a decree to pardon 101 convicts. Among those who were released from prison four were recognized by human rights organizations as political prisoners. This is the executive director of the Center for Monitoring Elections and Democracy Training Bashir Suleymanli, youth activist Orkhan Eyubzadeh and two religious activists, Anar Gasimli and Ramil Veliyev.

According to Gyulalyev, the pardon does not meet the expectations of human rights defenders, as they released only a few people from more than 100 political prisoners.

The pardon did not even touch the former Health Minister Ali Insanov and the leader of REAL Ilgar Mamedov, the violation of whose human rights was already recognized by the European Court of Human Rights.

"In the last pardon my attention was attracted by one point. 59 of the 101 people convicted were sentenced to imprisonment on charges of committing serious crimes (http://www.president.az/articles/14580). For some of them the courts decided in 2013 and even in 2014. They did not serve 1/3 and even 1/5 of the sentence. Of course, we are not against the release of convicted people, with the rampant social injustice, thieves capturing the highest echelons of power, corrupt officials, and traders in deputy mandates. We believe that there must be restored social justice, declared "Gold Amnesty" and reviewed the conditions of arrest and punishment," further notes Gyulalyev.

He casts doubt on the adoption of a pardon "based on the principles of humanism," because among the released persons there are those convicted of murder, injury to people, seizure of another's property, destruction of public property, smuggling, drug trafficking and others.

The latest order once again exposed the "imitation policy" of the authorities in solving the problem of political prisoners, said Gyulalyev.

"The existence of political prisoners is associated with the essence of this power and its philosophy. Where authoritarian regimes exist, there occur repressions and arbitrary arrests," believes Gyulalyev.