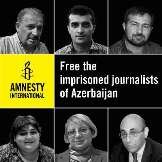 The release of two "prisoners of conscience" in Azerbaijan is a positive step, but in the country's prisons there are additional 20 such prisoners. Therefore, giving a pardon can only be considered a formal gesture to reduce criticism on the eve of the first European Games in Baku. This is stated by Amnesty International.

The paper recalls that the March 18 order of the President of Azerbaijan pardoned the executive director of the Center for Monitoring Elections and Democracy Training (CMEDT) Bashir Suleymanli and a youth activist and blogger Orkhan Eyubzadeh.

"This is good news. But how with the rights of others who have not been arrested for their crimes, but for criticizing the regime? Azerbaijani authorities grant freedom with one hand and take it with the other. Two days ago the court on trumped up charges sentenced the brother of an activist to 6 years in prison (meaning the brother of the activist of the party Musavat Faraj Kerimli, Siraj Kerimli)," said Deputy Director of Amnesty International's Europe and Central Asia Department Denis Krivosheev.

In his view, if the Azerbaijani regime really seriously thinks about human rights, it must immediately and unconditionally release all "prisoners of conscience". The government should stop arrests on politically motivated charges.

Amnesty International considers insufficient the release of only Suleymanli and Eyubzadeh. The organization considers it necessary to achieve their full rehabilitation and to investigqate complaints of ill-treatment of the activists.

In turn, the spokesman for the US State Department Jen Psaki on March 19 said US welcomes the release of the CMEDT representative Bashir Suleymanli and three other activists. (In addition to Suleymanli and Eyubzadeh were also pardoned religious activists Anar Gasimli and Ramil Veliyev).

"We urge the government of Azerbaijan in the coming months to take additional steps to release other persons arrested for public activities. Thus, the government would confirm the commitment to respect the obligation to protect the fundamental freedoms of the OSCE and other international structures," said Psaki.