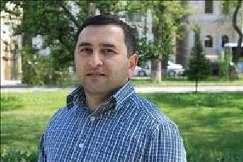 Bashir Suleymanli, the executive director of the Elections Monitoring and  Democracy’s Studies Center (EMDS) who was released yesterday  in accordance with the presidential decree of pardon, said he expects free more political prisoners.

Concerning the alleged charges  against him, he said: "We did not commit these acts.

He believes that other NGO activists arrested on these charges should be released. "It is necessary to create in Azerbaijan  normal conditions for civil society activities, for civil society is an institution  number one serving development of the state," said Suleymanli. As a human rights activist, he made some  observations during his arrest in jail and prison. "In places of detention compared to previous times there are mitigating against prisoners. But in any case, there is a need.

I want to develop proposals for the reform of the justice system, the prison service. There must be a new approach to the issue of detention. It is right to keep together for accused for the first time and  the repeat convicted," said Suleymanli.

According to him, the majority of those arrested are young people under the age of 35 years.

"Most of those  are convicted of drug. It is necessary to carry out social activities, and prevent offenses involving trafficking and drug smuggling. Arrests overcome these crimes is impossible," said Suleymanli.

He believes that the government should discuss the proposals of NGOs and listen to them, to be open to cooperation.

Suleymanli expressed his gratitude to the local and international community, the media and journalists for their support.