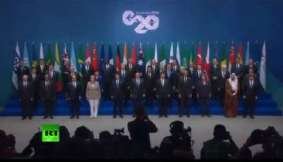 Azerbaijani Deputy Foreign Minister Mahmud Mammadguliyev will participate on March 26-27 in Izmir at the preparatory meeting for the summit of the Big Twenty.

The G20 summit will be held in Antalya, Turkey in November. In preparation for the summit, discussions are held at the level of representatives of governments and states.

At the meeting in Izmir the Azerbaijani delegation will include representatives of the Ministries of Economy and Industry, Labor and Social Protection, and Energy, and the General Prosecutor's Office.

The sides will discuss issues on the agenda of the G20 summit on the global economy, financial regulation, taxation, employment, trade, the fight against corruption, development and energy.

In November last year, President Recep Tayyip Erdogan Taipei, using his right of the host of the G-20 summit in 2015, invited the President of Azerbaijan Ilham Aliyev to attend the forum as a personal guest. During the telephone conversation, December 1, 2014 Aliyev thanked Erdogan for the invitation.

Thus, as reported by the Ministry of Foreign Affairs of Azerbaijan, Baku is invited to participate as a full member in all the events organized on the platform of the G20 during the presidency of Turkey from 1 December 2014 to 30 November 2015.

The last summit was held in Brisbane, Australia on 15-16 November 2014. The main theme of the summit was security and the Ukrainian crisis.

In the final communique of the "Group of Twenty", the parties have approved a plan of action to combat corruption in the years 2015-2016, which pledged to jointly improve the transparency of public and private sectors of the economy, noted the need to create an international infrastructure center and urged the US to stop hindering reform of the IMF.

Big Twenty (G20) is a forum for governments and heads of central banks of countries with the most developed and developing countries for cooperation and consultation on matters relating to the international financial system. The participants include the 20 largest national economies - Argentina, Australia, Brazil, Britain, Germany, India, Indonesia, Italy, Canada, China, Mexico, Russia, Saudi Arabia, the USA, Turkey, France, South Korea, South Africa, Japan and the European Union. In addition, usually the G20 meetings are attended by representatives of various international organizations, including the Financial Stability Board, the International Monetary Fund, World Trade Organization, the United Nations and the World Bank.

Together, G20 represents 85% of global gross national product, 75% of world trade (including trade within the EU) and two-thirds of the world's population.