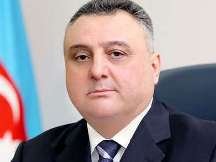 The security and stability of Azerbaijan in 2014 were fully secured, the MNS chief Eldar Mahmudov said in his speech on the occasion of the 96th anniversary of the establishment of the national security of the country.

According to him, in these difficult times the effective organization of intelligence activities is an important factor. To confirm his words the MNS chief mentioned identification of "two persons who had collaborated with foreign intelligence agencies", without specifying their names.

According to him, some citizens have worked for the secret services of Armenia, under the guise of professional activities for financial reward, and passed intelligence to the enemy. According to this, a criminal case is against two persons acting under the guise of NGOs, he said. (Note that the accusations were leveled against the journalist Rauf Mirkadyrov, the human rights activist Leyla Yunus and her husband Arif Yunusov - Ed.)

The minister also pointed to the investigation into a group of citizens of Azerbaijan who exceeded their powers. For payment, they illegally returned to Turkey citizens of Central Asia deported from that country.

The MNS chief also mentioned 33 Azerbaijanis who participated in the fighting in Syria, as well as four members of the terrorist organization operating in the Pakistan-Afghanistan area - they are all citizens of Azerbaijan and have been prosecuted.

Also detained were seven members of two radical religious extremist groups. Arrested were another 10 people, who have committed crimes based on religious intolerance, said Mahmudov.

He stressed that on the eve of the European Games proactive preventive measures were carried out in Azerbaijan to prevent possible provocations by radical religious circles and foreign intelligence agencies.

Concerning the fight against drug crimes, he said that over the last year there were revealed and seized about 329 kg of drugs, including 183 kg of heroin. In total, there were initiated 41 criminal cases and criminal charges were brought against 84 people.