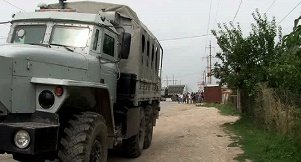 The Human Rights Centre (HRC) "Memorial" intends to appeal against the refusal to initiate criminal proceedings against participants of the counterterrorist operation (CTO) in the Dagestani settlement of Vremenny. After the CTO had been completed, local residents have claimed a large-scale destruction in their village.

The "Caucasian Knot" has reported that on March 8, 2014, a CTO regime was introduced in the Untsukul District of Dagestan. During the special operation in the settlement of Vremenny, the local residents reported that local school and kindergarten stopped working in the village. Besides, the villagers reported on food shortages and claimed that power agents destroyed farm buildings and private houses. The special commission set up for assessing the damage found 52 houses unfit for living and subject to demolition.

Immediately after the CTO in the settlement of Vremenny had been completed, the HRC "Memorial" has sent to the investigating authorities a request to initiate criminal proceedings against law enforcers involved in the CTO. However, the Buynaksk Investigating Division of the Investigating Department for Dagestan of the Investigating Committee of the Russian Federation (ICRF) has issued the refusal to institute criminal proceedings. This was told to the "Caucasian Knot" correspondent by Yulia Orlova, the Press Secretary of the HRC "Memorial", on April 14.

Oleg Orlov, a member of the Board of the HRC "Memorial", has told the "Caucasian Knot" correspondent that the ICRF's decision will be challenged at a higher authority in the nearest future.

"The reaction of the ICRF is as expected, since such cases and investigations into them are often sabotaged by the investigating authorities. This is not the first and not the last case: they intend to use every way to free law enforcers from blame," Oleg Orlov has said.