Obama does not use the word "genocide" in Friday’s speech 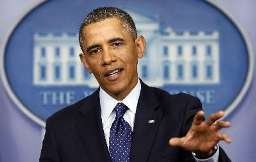 Press Secretary of the National Security Council Bernadette Meehan said the United States will celebrate the anniversary of the massacres and "calling for a full, frank and simple recognition of the fact that we consider the interests of all parties."

A senior administration official commented on a sensitive issue, noting that the White House expects Obama classifies "historic event" as "massacres", which is known in Armenian as "Meds Yeghern."

"We know and respect the fact that some hope to hear another expression of this year. But we have our own point of view,"  said the official.

"The approach that we have chosen in recent years,  remains true for the recognition of the past, and for our ability to work with regional partners to save lives now."

National Security Adviser Susan Rice met on  Tuesday with Turkish Foreign Minister Mevlut Cavusoglu, and encouraged him to "take concrete steps to improve relations with Armenia, to promote an open and frank dialogue in Turkey about the atrocities of 1915," the statement said the White House.

The US delegation to attend the commemoration of the victims of 1915 in Yerevan, headed by Finance Minister Jacob Lyu.