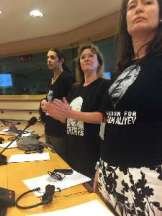 The unprecedented repression against civil society in Azerbaijan continues — it seems to create little worries in Brussels: on Wednesday the European Parliament hosted an event promoting the European Olympic Games, which are taking place in Baku in June.

We should hear the European Union call for the charges against Rasul Jafarov and Intigam Aliyev, amongst many others to be dropped, in order to allow them to continue working, and allow them to regain liberty.

Following the 2012 Eurovision Song Contest, the 2013 presidential election and the 2014 Chairmanship of the Committee of Ministers, all missed opportunities for progress, ahead of the 2015 European Olympic Games, the European Union needs to stand firm in affirming that it will do business with Azerbaijan, but not as usual, under the conditionality of the release of human rights defenders, activists and journalists. In this context, a public message that no European Union leader will attend the opening of the European Olympics needs to come, now.

The EU instead came out with its statement in which it did not call for release and, instead, naively focused on the possibility for Rasul Jafarov to be able to appeal this unfair verdict. This shoulder pat looks even more awkward in comparison to the clear US State Department statement denouncing the political motivation behind Rasul Jafarov’s sentencing and asking for the release of Rasul Jafarov and the others imprisoned simply for exercising their fundamental freedoms.

The way forward for the EU is to begin calling for the charges against European Union grantee NGOs to be dropped, a systematic public assessment of the on-going court hearings of Rasul Jafarov, Intigam Aliyev.

The fact that most of the grantees of European Union human rights funds from Azerbaijan are today either behind bars or outside of the country did not change the EU’s stands on Azerbaijan either. We should be hearing EU officials, in Baku and in Brussels, clearly stating that their grantees have been abiding to excessively bureaucratic and restrictive NGO laws.

On 21 April 2015, a new hearing will take place at the Baku Administrative-Economic Court in the case against the Institute for Reporters’ Freedom and Safety (IRFS). The leader of the organisation, Emin Huseynov, was forced into hiding and has since August 2014 been living at the Embassy of Switzerland in Baku. The same is true with Intigam Aliyev. Leader of the Legal Education Society (LES), he is also one of the grantees of the European Union about which the EU remains silent. As it appears from trial observations, the charges against Intigam Aliyev are weak and the charges regarding the lack of registration of his NGO’s grants are unfounded.

Instead of being clear, European Union leaders indeed continue to believe in "quiet diplomacy” and deeper engagement with the country’s authorities. It was hence not that surprising, although disappointing to hear the EEAS representative at the European Games event clap to Azerbaijan’s successful preparation for the games whilst shying away from addressing key issues related to civil and political rights.

Extensive travelling of European Union leaders also continued. The Vice-President of the Commission Maroš Šefčovič has been in Baku in February 2015. The EU’s human rights voice Stavros Lambrinidis has also visited Baku in February 2015. And just last week, Commissioner Johannes Hahn went to Baku. But still no clear call for the release of human rights defenders, journalists and activists behind bars in Azerbaijan.