Herbert Salber: If war resumes, all will lose 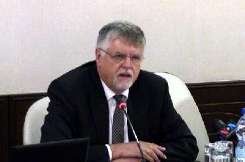 the EU Special Representative for the South Caucasus, Herbert Salber, today shared his vision of resolution the Karabakh problem in Baku at the meeting with a group of NGO representatives.  The meeting was held within the framework of the roundtable, devoted to the presentation of the report on the problems of refugees. Salber regretted that the long-term efforts of the mediators and the parties to the conflict themselves have not led to progress in resolving the conflict. He expressed concern that the escalation of the contact line is not terminated, and "almost every day people are dying." Without mutual compromise resolution of the conflict is hardly possible, and necessary to continue the work of civil society in Armenia, Azerbaijan and Karabakh to search for reconciliation.

"In the end, the solution of the conflict will depend on the ordinary citizens, but now we  can talk  only about  the  settlement," said Salber.

As for the position of the European Union, the Brussels supports the efforts of the Minsk Group and cannot play a major role in this process. Changes in the structure of the Minsk Group or the involvement of other intermediaries for the settlement  is unlikely. "The OSCE Minsk Group  is engaged in this for more than 20 years, they have gained experience and have built up various proposals for this time. It is hardly possible and productive to reject and start from  the beginning," said Salber.

Regarding the role of the EU, Brussels is ready to support projects and actions aimed at strengthening the confidence-building measures and contacts between the conflicting parties. If we can reach an agreement, the EU will allocate funds to overcome the effects of hostilities, he said. Referring to the situation of refugees, the EU representative noted that he  familiarized  with them during this visit, and is ready to meet and talk to them with respect to the existing problems.

"We must be prepared to make compromises, but we do not see it. We cannot solve the conflict instead of its participants," he said. Salber also considers incorrect comparison of the Karabakh conflict and other conflicts, and opposed comparing Europe and actions in relation to the situation in Ukraine and in Karabakh.  Each conflict has its own history and roots. It is counterproductive to compare them. In addition, in each case there are geopolitical interests of certain powers.

In particular, Salber expressed doubt that against Armenia can be applied the same sanctions as against Russia for its actions against Ukraine.

Speaking about the possibility of military solution of the conflict, Salber said that it is too risky in the case of military action "all will lose." The consequences of the resumption of war will be unpredictable, said a spokesman for the European Union.