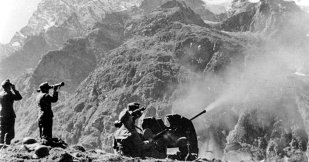 Natives of the Caucasus were active participants of the Great Patriotic War, while the myths of their mass desertion and collaboration with fascists are intended to justify the repressions against Caucasian nations, peoples, the historians interviewed by the "Caucasian Knot" assert.

At the start of the war, recruitment of soldiers in Northern Caucasus was held without regard of nationalities; and military commissariats did not run any statistics of national composition of conscripts, said the historians Alexei Bezugolny, Nikolai Bugai and Evgeny Krinko.

The myths about desertions and collaboration in the historical science were formed under the influence of the ideology of that era, said Professor Movsar Ibragimov, the head of the Department of Russian history of the Chechen State University. According to his story, those who had already been on the front were registered as deserters – recruitment summons were sent to their addresses, and when they failed to appear, they were registered as deserters.

According to Ibragimov, the person of Khanpasha Nuradilov, who killed 920 Nazis from his machine gun, deserves special attention. Today, nine Chechens bear the title of the Hero of the Soviet Union and Russia, said the historian.

He does not deny facts of desertion, but still treats the data offered by the Russian historical science calls as "hypertrophied".

In his turn, Eduard Abramyan, an Armenian historian, emphasizes in his book "Caucasians in the Abwehr", following modern Russian researchers, the close relationships of rebels in Chechnya and Dagestan with the German Abwehr intelligence service, which encouraged anti-Soviet sentiments among mountaineers and tried to take their movement under control.

In Sukhumi, participants of "Kunaki" Festival call Wild Division an example of Caucasians' integration into Russia