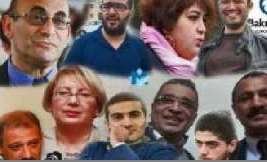 In a press release of the working group, which includes about 30 civil society activists and defense lawyers, it is noted that the list of 98 people made public by on 8 August 2014, 26 were pardoned and released at the end of the period.

However, after the publication of this list, the repression continued and new political prisoners appeared.

The Working Group examined the case of the people arrested again. Based on the criteria of the PACE resolution on 3 October 2012, the Working Group has included still 8 people in the list of political prisoners: Murad Adilov (PFPA member, brother of the head of the press service of the Azerbaijan Popular Front Party and a journalist Natig Adilov), Seymour Hazi (columnist of Azadlyg, presenter of Azerbaijani Hour on the Internet, a member of the Presidium of the Azerbaijan Popular Front Party), Khadija Ismailova (investigative journalist), Elvin Abdullayev (Azerbaijan Popular Front Party member), Gadir Hudabahshiev (member of PFPA), Asif Yusifov (adviser to the head of PFPA, invalid of the Karabakh war), Taleh Khasmamedov (human rights activist ) and Mubariz Abdullayev (nephew of the political emigrant Elshad Abdullayev).

Note that the basic list of 98 people at the time was based on the lists of the human rights defenders Leila Yunus and Rasul Jafarov, who at the time of its publication also found themselves behind bars.

Many local and international organizations have accepted these data as a single list of political prisoners in Azerbaijan.

C.Kazymly: Working group on political prisoners must be re-formed