Residents of Chechnya state pressure on girls' families at marriage 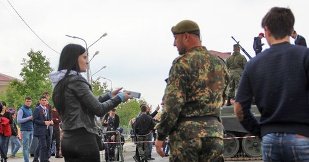 Reports about forcing a 17-year-old girl to marry the boss of the Nozhai-Yurt ROVD (District Interior Division) caused resonance in Chechnya. Authorities have refuted violations of her rights, but locals claim that officials' arbitrariness in such situations is widespread in the republic.

On April 30, the journalist Elena Milashina reported that "Nazhud Guchigov, the 57-year-old head of the above ROVD," demanded from relatives of a girl from the village of Baitarki to force her to marry him on the day of her 17th birthday. Later, it became known that Guchigov is 46 years old.

Later, Milashina wrote in the "Novaya Gazeta" that Nazhud Guchigov himself had refuted the information about his interest in the girl, threats to her family and deployment of police posts.

Local residents told the "Caucasian Knot" correspondent that unequal marriages in Chechnya are actually taking place, but in recent years the republic is systematically facing facts, when top-ranking officials and power agents use various means of pressure on families of young girls.

The family members of the girl are working at decent posts; and they received threats that they may lose their jobs, said a girlfriend of theZarema family.

"He is married and has children. She's younger than his children. The Chechen woman is powerless; she can expect help from nowhere. Kheda told him that she has a boyfriend, but it was disregarded. They say that her boyfriend was beaten up half to death," the portal "Echo of the Caucasus" quotes the above girlfriend.