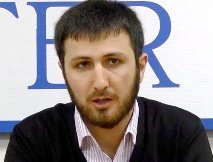 Mukhammad Magomedov, one of the leaders of the public organization "League of the Just", who has been detained today in the centre of Makhachkala, is being kept at the Lenin ROVD (District Interior Division). This was reported by a source in the ROVD. Mukhammad Magomedov himself has declared that he was planted a weapon.

Earlier, witnesses have reported that Mukhammad Magomedov was detained by men in masks in Gadjiev Street, not far from the Rector's Office of the Dagestani State University (DSU).

According to a source in the Lenin ROVD of Makhachkala, Mukhammad Magomedov has been brought to the police station.

The "Caucasian Knot" correspondent has managed to contact Mukhammad Magomedov himself by phone, and the detainee has confirmed that he is being kept at interrogation department of the Lenin ROVD of the Dagestani capital. According to Mukhammad Magomedov, he is not allowed to be visited by an advocate.

As at 11:00 p.m. Moscow time, Magomed Magomedov, the detainee's advocate, entered the ROVD. However, he has not yet succeeded in meeting his client.

According to Abakar Abakarov, a member of the Board of the Congress of Peoples of the Caucasus, after 11:00 p.m. Moscow time, Ruslan Rasulov and Nelly Radjabova, members of the Public Monitoring Commission (PMC) of Dagestan, entered the ROVD; however, they did not visit the detainee yet.

Dagestani journalist Idris Yusupov has reported that staff members of the ROVD "not allowed even visiting the on duty unit of the ROVD to file a complaint about non-admission of the advocate to the detainee." According to the journalist, Mukhammad Magomedov is soon to be transferred to the IVS (detention facility).