Rally under Slogan "Save Ourselves!" Ended 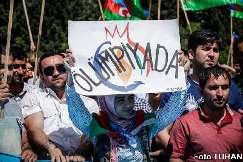 Today the opposition rally participants at the stadium Mehsul demanded the punishment of the officials guilty of the May 19 fire in Azadlig Avenue. They also wanted "to offset the damage caused by the devaluation of the manat, to reduce interest on bank loans and to release political prisoners. The rally was held under the slogan "Save Ourselves!”

The meeting began with a minute of silence in respect of memory of those killed in the fire on May 19 in a 16-storey building at Azadlig Avenue, a youth activist of the party Musavat, Nargiz Yagublu, and soldiers who died recently in non-combat conditions.

Leading the meeting, Deputy Chairman of PFPA Abulfaz Gurbanly said that the event is held in protest against the sharp devaluation of the manat on 21 February and the 19 May fire that claimed 15 lives due to the fault of government officials.

Gurbanly said that the Constitutional Court deceived hopes 1 million borrowers of loans in banks, deciding in favor of the banks.

The leader of the Popular Front Party Ali Kerimli said that the government had lost the confidence of the people after April 5 and is trying to prevent opposition rallies.

Instead of Sunday, when more people have the opportunity to participate in the action, they sanctioned rally on Saturday, said Kerimli.

"Only a small part of disgruntled citizens have gathered here. But the day is near when our energy will cover the whole of Azerbaijan," said Kerimli.

Referring to the house fire at Azadlig Avenue, Kerimli said that people became victims of the gluttony of the power. "We warned them against facing buildings with inflammable synthetic material. But they did not listen. There was a fire in the Khatai district, too, but they did not react. Finally, 15 people were killed and only then they began to dismantle the trim. This brought them billions, and now they want to shirk responsibility and blame everything on the chief of some housing and utilities department," said Kerimli.

He also pointed to the problem of violence in the army and the continuation of the death of soldiers in non-combat conditions.

Where people stand up for their dignity, there is violence, as if the repressive power model is an example for others to follow, said Kerimli.

He also pointed to the trampling of human rights, even the rights of invalids of the Karabakh war. "In the past month, a person with disabilities hung himself in Jalilabad and another one committed self-immolation. For their deeds they (authorities) have to answer," said Kerimli.

The mother of the arrested activist of PFPA Elvin Abdullayev, Zulfiya Abdullayeva said that her son was persecuted only for his political views. She said she was proud that she brought up a fair and decent citizen, who does not put up with lies and injustice."

The NCDF leader Jamil Hasanli said that the founders of the Azerbaijan People's Republic (ANR - 1918-20) created the state not for the sake of dynastic power to capture it in the future.

According to him, spending huge funds in Europe, the authorities do not do anything real to restore the territorial integrity of Azerbaijan.

"We should not wait for the corrupt government to liberate our territories from occupation," said Hasanli.

In his opinion, Azerbaijan has become a country of political prisoners.

"In the past two years repression against young intellectuals, politicians and journalists has intensified," he said.

Hasanli also touched on the fire on May 19.

"As a result of the crimes of government officials, 15 of our citizens lost their lives. Of these, four were very young children and one was a teenager. However, none lost his post because of this tragedy. Is it possible? The people were burned alive and suffocated from the smoke. And Abid Sharifov said that the technique of MOE could not get there. But when you covered the building with that deadly facing, did you not know that it was inevitable? Shame on those who doomed the Azerbaijani citizens to such a horrible death!" said Hasanli.

Participants of the meeting took these words by Hasanli with shouts of "Resign!", "Ilham, get out!" and others.

The rally was attended by several thousand people.

Before the rally the police did not let several posters, including the image of the building that burned on 19 May, to the stadium.

At the end of the action there were detained two people, shouting slogans "Allah Akbar!" The organizers did not rule out that they were provocateurs.