No lesson is learned 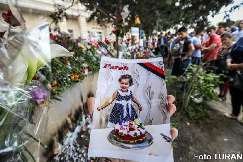 First an emotional speech by President Ilham Aliyev on May 20 at a meeting of the State Commission to investigate the causes of fire in a skyscraper in Baku, when 16 people died, instilled some hope that the corrupt system in the construction sector will weaken their clutches.

President directly threatened severe punishment to officials for theft and nepotism. But some optimism lasted only a couple of days and came down, after the president approved the right of the Ministry of Emergency Situations to suspend the construction and demolition of facilities.  The rules give the Ministry the right to suspend the construction, if the project does not correspond the architectural planning and there are deficiencies that threaten the safety of the construction, use of materials without quality certificates, and others.

The problem is that just the MES has always a full authority to supervise the quality of construction; and it is not the first time when due to fault of MES citizens suffer, the government is caused great harm.

The Ministry of Emergency Situations (MES) was established in 2006 and is endowed with a wide range of powers from disaster relief to exercise control over the construction work and materials. The State Service for fire control, civil defense forces, the State Agency for Control over the safety of construction works, the Control Center for crisis situation, Central Laboratory, Emergency Rescue Department, Capital Repair Department and others are structures belonging to this super Ministry.

Immediately after creation, the MES threatened to demolish all the buildings that do not meet construction standards. However, in August 2007 destroyed a 16-storey house, as a result of which five people died; in January 2014  two people died  during the collapse of the house in the Heydar Aliyev Avenue, and there were a number of  fires in the buildings  that are under construction.

The most large-scale abuse of Ministry of Emergency Situations  were noted during the elimination of consequences of floods in Kura area in 2010. The Ministry was  entrusted with the construction works, as well as distribution of  material and financial assistance among the affected. One million dollars were allocated for those purposes, most of which were stolen. This is reflected in the reports of the NGO Kura Civil Society Staff, directed to the President and all members of the government. A similar situation  was observed  during the

elimination of consequences of the earthquake in 2012 in Zagatala and Belokan areas for which  $540 million were allocated, and were also embezzled.

It should be noted that the cladding of buildings, which was flammable and poisonous was carried out with the direct authorization or default on the part of the ministry. Several cases of fires over the past couple of moth due to polyurethane coverings were signals of impending disaster, but were not heard in the offices of this agency, and other branches of government.

Reporters who dared to ask questions about the next steps about facing houses. The behavior of this ossified bureaucrat is a shining example of the power’s attitude to civil society and the press. Not any news conference, briefing,  or press release setting forth the official point of view on the incident was held. Thus, power has shown its total disregard for public opinion and to its obligations to citizens.

Can the society expect a change  for the better after the emotional statements of the president about the inevitable punishment of the perpetrators of the private and the great tragedies? Punishing  the executors   of budget projects and strengthening the powers  of the responsible, but reckless agency  means that the power passed into the next defense till the next emergency, and till the best time for it.

So far, public opinion is directed the wrong track. Journalism calls the arrested court businessmen  the oligarchs, trying to present this new nouveau riche almost the main culprits of all the troubles  of the country. However,  in social science  oligarchs  are called people, concentrating in the hands power and capital, and a circle of such  united  persons with common interests form a political regime - the oligarchy. History knows few examples when the oligarchy handed over members of  their circle to society. A priori, it means the destruction of the foundations of the system,  on which  such political regime is based. This means that man-made disasters, as a priori, will pursue Azerbaijan, and may lead to a rise or a loss of trust in the authorities. The current public sentiment aroused by the devaluation of the national currency and the national values, testifies the second.