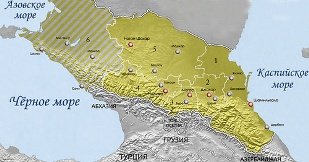 The growth of the number of cases, when residents of Dagestan swear to the "Islamic State" (IS), suggests that the "Imarat Kavkaz" is losing its influence in the region and could eventually join the IS, said the experts, interviewed by the "Caucasian Knot". The "Caucasian Knot" has reported that Nadir Medetov (Nadir Abu Khalid), a well-known Salafi preacher from Dagestan, swore to the leader of the "Islamic state", which was recognized terrorist organization, and urged his supporters to follow his example. Video, showing how Nadir Abu Khalid met members of the IS and sworn to Abu Bakr al-Baghdadi, the leader of the terrorist organization, was posted on YouTube on May 23. Various sources, including the Russian FSB, have confirmed that militants from Russia are fighting for the "Islamic State", says the document prepared by the "Caucasian Knot": "Caucasians in the ranks of IS (ISIL)". Abdullah Rinat Mukhametov, a political analyst and an expert of the Council of Muftis of Russia, is confident that the IS is becoming more and more popular amidst the radical part of Caucasian youth. Geidar Jemal, the chairman of the Islamic Committee of Russia, is sure that the main factor of IS' popularity is in its successful actions. So far, it is too early to discard the "Imarat Kavkaz", but one cannot but note a serious decline in its functioning, Professor Mikhail Roschin, a senior researcher at the Centre for Studying Central Asia, the Caucasus and the Volga-Urals Region of the Institute of Oriental Studies of the Russian Academy of Sciences (RAS), said in his turn. As noted by Akhmet Yarlykapov, a senior researcher at the Centre for Problems of the Caucasus Regional Safety of the MGIMO, an ethnographer and researcher of the Caucasus, in Northern Caucasus cases of bringing oath to the IS are characteristic for Chechnya and Dagestan. "If we talk about the 'Imarat', the transition process of members of the underground is a large-scale one. I'd raise the issue that the 'Imarat' will, most likely, disappear whatsoever. The possibility of such a scenario is too high," said the expert.