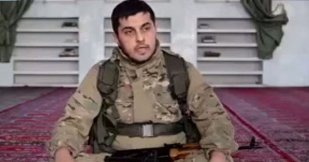 The oath brought by the preacher from Dagestan Nadir Abu Khalid (Medetov) to the terrorist "Islamic State" (IS) aims to recruit new IS supporters in the Caucasus. The case should be dealt with by special services, which, however, need to understand that any repressions against Muslims are radicalizing them. Thus was the opinion of the experts interviewed by the "Caucasian Knot". Various sources, including the Russian FSB, have confirmed that militants from Russia are fighting for the "Islamic State", says the document prepared by the "Caucasian Knot": "Caucasians in the ranks of IS (ISIL)". The "Caucasian Knot" has reported that Nadir Medetov (Nadir Abu Khalid), a well-known Salafi preacher from Dagestan, swore to the leader of the "Islamic state", which was recognized terrorist organization, and urged his supporters to follow his example. Video, showing how Nadir Abu Khalid met members of the IS and sworn to Abu Bakr al-Baghdadi, the leader of the terrorist organization, was posted on YouTube on May 23. Magomed Magomedov, a special correspondent of the Dagestani newspaper "Chernovik", believes that a factor that contributed to Medetov's decision to swear to the IS was the increased pressure on the Salafi community in Dagestan. "People like him, who are in the leadership positions, take the situation close to their hearts. They are concerned about the facts when people are detained right from mosques, when weapons are planted on them, and when extrajudicial executions take place," Magomedov has suggested. According to Abdullah Rinat Mukhametov, a political scientist and an Islamic scholar, the story of Nadir Abu Khalid's departure to the IS, a person, who had been detained and placed under house arrest, but then occurred outside Russia, should be the subject of close attention to the work of special services. The expert could not rule out the advance of the project "Islamic State in Northern Caucasus"; while he expressed fears that the fight against a powerful new enemy could become a multiplier for the corporation of the anti-terrorist structures created on the basis of Russian power agencies.