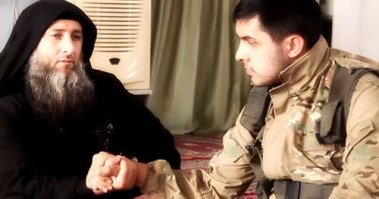 Nadir Medetov (Nadir Abu Khalid), a well-known Salafi preacher from Dagestan, has sworn to the leader of the "Islamic state", which was recognized terrorist organization, and urged his supporters to follow his example. In Dagestan, before Nadir Abu Khalid, only militant leaders have publicly sworn to the IS.

On May 23, on YouTube, user kazim samu posted the video, showing how Nadir Abu Khalid met members of the IS and sworn to Abu Bakr al-Baghdadi, the leader of the terrorist organization. In the video, Nadir Abu Khalid dressed in camouflage and holding in his hands a submachine gun, swears to Abu Jihad, an associate of Tarkhan Batirashvili (Umar al-Shishani), one of the well-known leaders of the IS.

Various sources, including the Russian FSB, have confirmed that militants from Russia are fighting for the "Islamic State", says the document prepared by the "Caucasian Knot": "Caucasians in the ranks of IS (ISIL)".

The "Caucasian Knot" has reported that Nadir Abu Khalid used to preach in the mosque in Hungarian Fighters Street in Makhachkala and then in the mosque in Derbent. Besides, he actively disseminated his ideas in social networks.

"His popularity extends far beyond Dagestan, since his lectures are available on the Internet and in video and audio formats. His popularity is very high, and he is one of the brightest and most charismatic preachers among the Russian-speaking Muslim youth," the "Caucasian Knot" has been earlier told by Ruslan Kurbanov, the senior researcher of the Institute of Oriental Studies of the Russian Academy of Sciences (RAS).