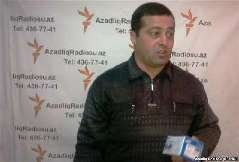 The journalist Elchin Ismayilli detained in Ismayilli yesterday was released in the courtroom today after warning.

In an interview with Turan, he said that was detained last night, when he returned home. He was stopped by three police officers, claiming he allegedly cursed in an unaddressed way.

Today in court the police gave confused and contradictory evidence. They argued that Elchin was drunk and tried to break down the door to the police.

"This is absurd, because it is impossible to break down the iron door with one’s bare hands. Even if there had been an attempt, then some physical damage should have been left on the hands or body," said the journalist.

As a result, the judge Azad Aliyev only issued a warning to the journalist.

In fact, according to the journalist, he was detained in connection with his professional activities. The police demanded from him to stop critical articles about the Ismayilli region, because it is "against the state."

In particular, it regarded the claims on a TV program Azerbaijani Hour on the Internet. From the journalist they demanded to cease communication with Program Manager Ganimat Zahid (located in the political emigration) and advised to "take the example of Eynullah Fatullayev."

The journalist was also accused of publishing an article "The results of monitoring Ismayilli" on the site www.cumhuriyyet.az, where he reports on the poverty and inability of people to buy the essentials. In view of this, the citizens mainly buy food on credit.

The police demanded that he remained silent until the end of the European Games and did not publish an article in the newspaper Azadlig.

In Azerbaijan, journalist Turkhan Kerimov reported by his brother as kidnapped was detained by police