The Lezgi Theatre is deprived of its history 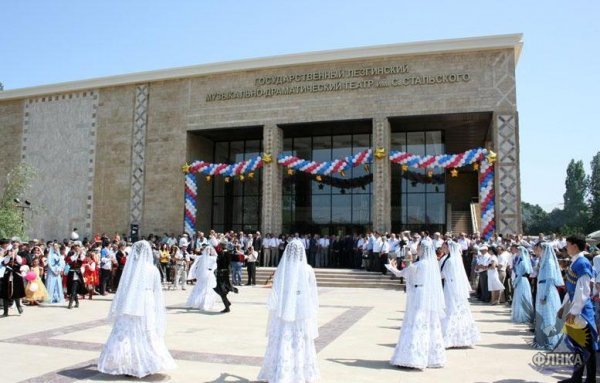 It seems that after artificial rejuvenation of Derbent by three thousand years the public of Dagestan should expect continuation of efforts to reduce the age of its cultural heritage.

This time it is the Lezgi Theatre's turn. In the autumn the anniversary of the temple culture will be held. Everybody was shocked to know that the age of the theatre was diminished by almost thirty years.

In his interview Alibeg Musayev, the head of the Theatre, talked about the upcoming plans for the 80th anniversary of the Lezgi Theatre to be celebrated this autumn, although it is well know that it was founded in 1906 and has existed for over 109 years.

In 1935 the Lezgi Theatre received its new name - State Lezgi Drama Theatre. Before that it was called Akhti Soviet Theatre. The theatre remained the same - the repertoire, the collective, the head, the location, the building - only the name was changed. But this does not prevent the organizers of the anniversary to count since 1935.

The most attentive readers will recall that earlier the Lezgi Theatre celebrated its anniversary - a century, the 90-year-old and the other at the same place as planned this year - in Ahti. The people of Akhti will be surprised when they, remembering the celebration of the 90- and 100-year anniversary of the theatre, will witness his alleged 80th anniversary this year.

It is noteworthy that the authorities find very curious reason for reducing the age of the cultural heritage of Dagestan. In November of 2012 the public learned that Derbent was not 5,000 years old, as had been previously thought, but 2000 - according to the announcement of the anniversary of the city.

In the case of the Lezgi theatre the same thing happened with the astonishing precision. The information, that the age of the theatre was reduced to 80 years has not been published anywhere. The public believed that the theatre is 109 years old. And they learned about the cuts directly from the plans for the anniversary. What is this, anniversary, as a new way of presenting surprises to the society?

It seems that factology is only indirectly related to the assessment of age of cultural objects, but the decisive factor is either the political situation or the interests of the third parties and groups.

More attention to the Lezgi Theatre!