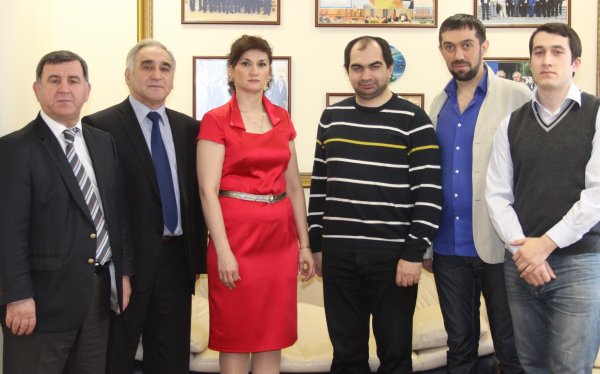 At the end of December FLNCA representatives – Vice President Rusaln Kurbanov, Chairperson of the Executive Committee Amil Sarkarov and Head of the Youth Department Gusen Shahpanov met with the leaders of the Federal National and Cultural Autonomy of Azeris in Russia.
The purpose of the visit was to identify possible areas of future cooperation between the two organizations. President of FNCA "AzerRos” Asif Magerramov and Vice President Rafael Babaev highly appreciated the initiative and thanked FLNKA’s representatives for the first steps made in this direction.
The greetings were followed by a discussion aimed at working out concrete tasks to be implemented in the course of the cooperation. Ruslan Kurbanov stressed that the peoples of the former Soviet Union are striving to return to a united community and the current reintegration processes are irreversible.
Ruslan Kurbanov believes that in the modern open world new models of the cooperation, including ethnic and cultural areas should be developed and the priority should be given to initiating joint youth projects built on the rich experience gained in this sphere by both organizations.
In his opinion the old historical ties between Lezgins and Azeris as well as the level of culture interpretation of our ethnicities leaves us no choice but to solve the problems we are facing by undertaking joint efforts in developing fruitful cooperation.
He reminded of the recent illegal arrests of FLNKA leaders’ relatives in Azerbaijan and the mutual efforts undertaken to resolve the problem successfully. The achieved success proves the effectiveness of dialogues to be used for resolution of any difficult problems. Ruslan Kurbanov emphasized the importance of seizing the opportunity to renew cooperation and interaction between the organizations right now after the misunderstanding had been removed.
In its turn Asif Magerramov completely agreed with Ruslan Kurbanov and emphasized that this cooperation was vitally important for them. He confirmed that Lezgins and Azeris are undoubtedly close and brotherly peoples.
He concluded that there would be no future for the people who do not show mutual respect to each other irrespective of their ethnicity. At the same time he admits that there are some interethnic problems both in Russia and Azerbaijan.
Magerramov believes that all peoples in Azerbaijan should have adequate representation in the highest authorities. He noted: "No way we should conceal such kind of problems having understood that they can be solved only by joint efforts”.
The head of "AzerRos” also pointed out that in order to improve this cooperation the Caucasian organizations needed some all-Caucasian platform where it would be possible to arrange joint events.
Amil Sarkarov agreed with Asif Magerramov and noted that establishing an all-Caucasian cultural center could be a very good start to achieve the goal. Such a common platform would lay the foundation forfurther rapprochement not only between Lezgi and Azeri communities in Moscow but also among all others who are interested in conducting an international dialogue.
The meeting took place in friendly atmosphere and each of the participants supported the idea of having a bigger joint event next month.
We hope that the cooperation between FLNCA and FNCA "AzerRos” will be strongly developing promoting fruitful dialogue needed for successful resolution of the problems that our peoples currently face.

Lecture on Lezgi people in Brussels