A meeting with FLNCA vice-president 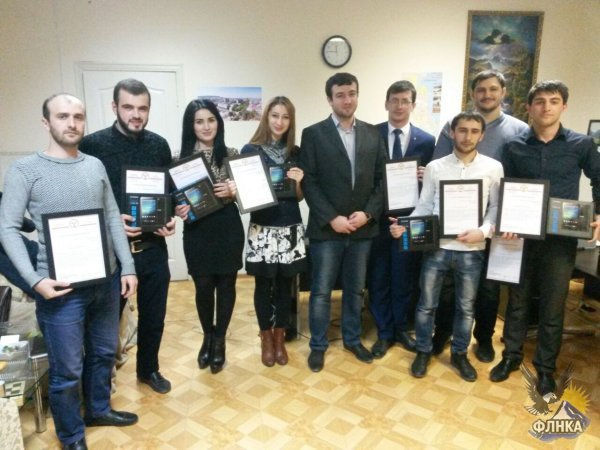 In February, Ruslan Kurbanov, vice-president of FLNCA, had a working visit in Dagestan. In Mahachkala, he met with activists from the Youth Department of FLNCA in Dagestan and with Magomed Aliyev, the Head of FLNCA representation in Dagestan.

Initially, we note that on the eve of the meeting, Magomed Aliyev held a rewarding of activists of the Youth Department. FLNCA leadership considered that the effective activity of FLNCA in Dagestan would not be possible without the assistance of youth activists in the republic. And so, in order to appreciate their contribution, they were presented with letters of thanks and tablet computers.

They talked about the key directions of the FLNCA Youth Department. The year of 2014 proved to be saturated at different social projects and showed that FLNCA formed a close-knit team of young activists who are ready to devote their time for community service.

And this year, FLNCA, with well-coordinated team can build and implement more ambitious and large-scale projects.

Discussing the main areas of activity, everybody agreed that it is necessary to continue the initiated in the past year, the project of educational forums for young people in Southern Dagestan. The Youth Department plans to hold such forums in each of the areas of Southern Dagestan. It is also planned to hold them on a regular basis to give a chance to an increasing number of young people to get this knowledge.

The next issue of the discussion at the meeting was charitable projects. It is appropriate to note that FLNCA has close ties and fruitful experience with charity fund "Hope" and they have already realized common charity projects.

At the meeting they also discussed the launch of youth business projects. It has been said that it is necessary to initiate a business incubator, where initiative youth, focused on achieving personal success, would confer and consult to develop promising business projects profitable in difficult conditions in our region.

At the end of the meeting, the participants discussed the preparations for the city holiday Yaran suvar. Thanks to the coordinated work of the team, last year they managed to celebrate the arrival of the spring at the highest level and the people were glad to take part in the festivities.