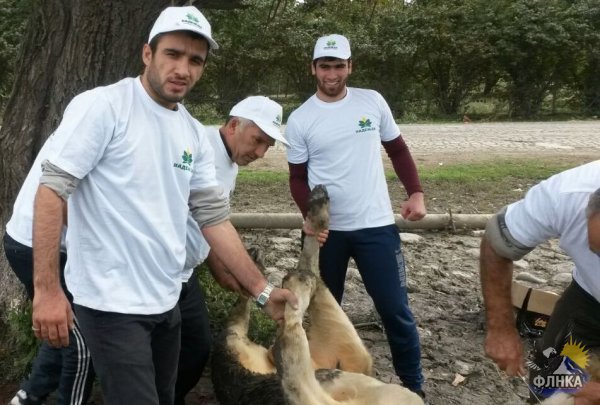 This year, as well as in the precious one, during the Eid Holiday many charity events took place in Dagestan. FLNCA Youth Department and charity fund "Nadejda" held a joint charity campaign in the southern Dagestan. The Suleyman-Stalsky District was among the first that received the charitable load. Three bulls were transferred to local civil society activists, including members of the FLNCA Youth Department, who distributed 120 shares of meat to needy families throughout the area.

The second point of the charity cargo destination was the Magaramhyursky area where local community activists received the cattle. Around noon, when the carcass were butchered the activists started the distribution of meat to needy families. The donations were received by a toatl of 161 families.

With the money, donated by volunteers to "Vozrozhdeniye”, the organization purchased 38 bags of flour. One bag of flour per needy family was distributed by Youth activists together with employees of the Fund.

The same evening, the Department of Youth and FLNCA Charity Foundation "Hope" delivered three bulls to the Akhty district. The head of the Youth Parliament Zeynidina Abilova reported that the next day, from early morning till late at night, the activists of the Youth Parliament were engaged in distibuting meat - 2.5-3 kg per family. In general the meat was distributed to a total of  one hundred and thirty poor families living in the villages the Akhty District.

Earlier this year, in late July the young parliamentarians from Achty distributed wheatflour to poor families of the district. The charity event was timed to coincide with the feast of Eid al-suwar.