It is vital the world is aware of our problems

The Lezghi public activist from Belgium 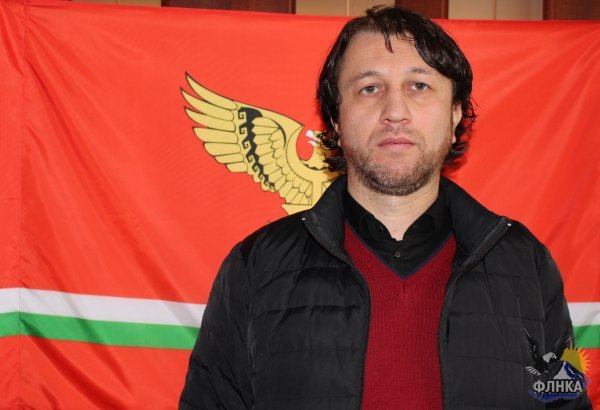 Ibragim Shalbuzov, our fellow countryman from Belgium has visited our office lately. He is one of those men who joined FLNCA activity at the international level. Here is the text of an interview with him:

Ibragim, you are welcome to your homeland. First of all, tell us about yourself a little.

I was born in a village of Kusar, Azerbaijan. I have been a patriot from the early childhood and I have always loved history of my native people and kept an eye on the situation with Lezghins in my homeland. I thought much about it and wrote articles related to this topic. When I lived in Azerbaijan the Lezghi language was not taught at schools, but my family spoke my native language at home and thanks to it I know Lezghi very well.

All my life I have been trying to be active in the public life of Lezghi people. I was involved in the Lezghi national and patriotic movement from the moment of its emergence in the late eighties.

I am a lawyer; I studied law in Volgograd, and then moved to Moscow. At the end of the 90-s I decided to go to Europe to where I was invited by my friend living in Belgium. I moved there and began learning the Holland language. It should be noted at that time there were good programs of adaptation of migrants in many countries of West Europe, including Belgium. Then the migrants were welcomed by the European countries and provided with good housing. Language training was also ensured by employers.

I attended the provided language courses, and alongside with Holland, I also learned French and German. Now in addition to native Lezghi and Russian I speak fluently three more foreign languages and also improve my English.  Now, thanks to my ability to find "common language" with different people, I am employed by a non-governmental organization that helps foreigners, migrants and refugees who come to Europe from different countries in search of a better life.

Unlike some of our fellow countrymen who leave and often assimilate and forget their roots, you do not lose touch with your Homeland. As we know you often come to Russia and Azerbaijan, you are interested in public-political life of the Lezghi people and are also involved in FLNCA activities in Europe.

Yes, that is right, I have always read the latest news, tracked the situation with my people and the problems they face and the ways the problems are resolved. The Lezghi people have very many problems: the problem of divided people, the economic situation in the districts of Lezghins compact settlement. And I think that in order to solve all these problems it is necessary to raise these problems to the international level.

Tracking information in internet I saw FLNCA’s website and became its regular reader. Recently I have learnt that FLNCA started to implement its activities at the international level.

Then I found contact information of FLNCA vice-president Ruslan Kurbanov, contacted him and asked him if I could somehow be involved in these activities. Later, in May, 2013, Tatyana Chubrikova, the head of FLNCA International Cooperation Department, contacted me. Since then I began to cooperate with FLNCA.

I was happy when I was called and suggested to take part in the FLNCA activities. I was very glad to meet with the FLNCA delegation in Brussels. I witnessed the very warm relations, both business and human, that had been developed between representatives of our organization and deputies of the European parliament, members of different commissions, employees of a number of international organizations.

I was present at the meeting of FLNCA President with the General Secretary of Unrepresented Nations and Peoples Organization. I saw how warmly FLNCA was accepted at the high European and International level. I am very grateful to FLNCA that they have raised the problems of Lezghi people to such a high level.

Since then I have taken part in all FLNCA events organized at the international level. Now I permanently keep in touch with Maud Vanwalleghem, UNPO Brussels office, and I try, to possible extend, to participate in all the events arranged by this organization.

Tell us about your plans for the future. How do you see the development of Lezghi issue at the international level?

One of the important steps would be opening of FLNCA office in Brussels. Now this city is not only the capital of Belgium, but also the capital of the European Union. Many international organizations are based in Brussels, and close cooperation with these organizations will help us to raise awareness of the Lezghin people’s plight among the world community.

I would also like to mention that every summer in Belgium not far from Brussels a big festival takes place where different ethnic groups from all over the world participate demonstrating their culture and arts. It would be nice for Lezghins to join the festival’s celebrations.

Are there other Lezghis in Belgium? And do you know many Lezgis living in the countries of Europe?

There are not many Lezghins in Belgium, I know only a few Lezghins living in Antwerp. I know many our fellow countrymen in Austria. There are Lezghis in Germany, Sweden, and Czech Republic. It would be very good for Lezghins living abroad to have a center where we could meet and maintain contacts.

In the 90s many Lezghins moved to Canada. But we do not know where they are and what happened to them.  Nowadays, thanks to social networks, our fellow countrymen living abroad try to communicate at least virtually which is very positive.  As we do not forget, wherever we were, that we are Lezghins, as we try to preserve ourselves as Lezghins, we can be sure that our people will have a nice future.