UNPO presents Lezghins to members of the Euro Parliament 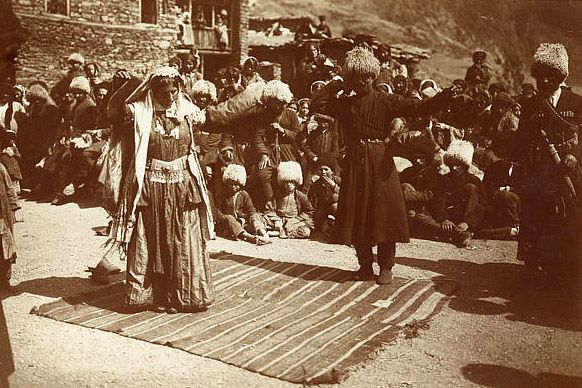 In the 16th century, separate free Lezghin societies appeared, which existed until they were absorbed by Russia in the early 19th century. In the 17th and 18th centuries, Quba, Shirvan and Shaki khanates (States) were formed in the South, where the Lezghins lived together with other peoples. In the early 18th century, the State of Shirvan existed for some time, and was recognized by the Russian Empire and the Porte (the Ottoman Empire). 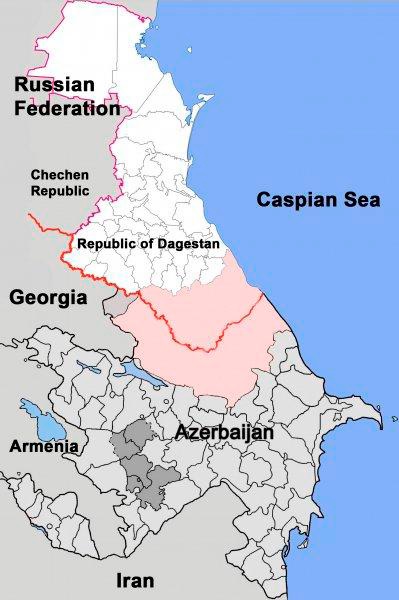 In the mid-19th century, the "Northern Lezghins" lived in Kyurinsky and Samursky districts and the city of Derbent, Dagestan region, formed the territory of the modern southern Dagestan. In 1921, the Dagestan Autonomous Soviet Socialist Republic was formed as part of the RSFSR,

In general, the Lezghins enjoyed better rights in Dagestan under the jurisdiction of the Russian Federation than in Azerbaijan, where they were subjected to assimilation policies. The Lezghins have traditionally suffered from unemployment and a shortage of land. Resentment was fuelled in 1992 by the resettlement of 105,000 Azeri refugees from the Karabakh conflict on Lezghin lands and by the forced conscription of the Lezghins to fight in the conflict. This contributed to increased tensions between the Lezghin community and the Azeri government over issues of land, employment, language and the absence of internal autonomy. Following the outbreak of the war in Chechnya in 1994 the border between Russia and Azerbaijan was closed. As a result, the Lezghins were for the first time in their history separated by an international border restricting their movement.

The Lezghins speak Lezghin, which belongs to the Lezghin sub-group of the Nakh-Daghestani group of the North Caucasian language family. Lezghin is taught as a foreign language in areas where many Lezghins are settled, but unfortunately teaching resources are scarce. In addition, Lezghin textbooks come from Russia and are not adapted to local conditions. Although Lezghin newspapers are available, the Lezghins have also expressed concern over the disappearance of their rich oral tradition. The only Lezghin television broadcasting available in Azerbaijan is received over the border from Russia. The status of the Lezghin people and language is not fixed in the law. This absence of appropriate status of the Lezghin language is extremely detrimental to its development, reproduction and use in various spheres of life.

Current Issues
The Lezghin’s main problem is their lack of a legal status, preventing them from securing their rights as a distinct historical community and nation in the territory of their traditional residence. As a result, the Lezghin ethnicity is being blurred and the socio-economic situation is deteriorating.
In the Republic of Dagestan (Russia) the Lezghin represent one of the 14 "title" peoples, whose language has official status within the state. However, this status is not fixed and Lezghin is a language of instruction only in mono-ethnic rural areas for the first two years at school. In towns and mixed settlements the Lezghin language is a school subject. This has led pupils and their parents to lose the motivation to learn their native language, since the scope of application of the Lezghin language is limited. Moreover, it is not mandatory with few exceptions. As a result, the number of people who know the Lezghin language is being reduced considerably.
The government authorities of Dagestan are formed by taking into account the ethnic composition of its population but without clear regulation, which leads to the obvious imbalances in political institutions. As a result, the Lezghin are underrepresented in government bodies. This is of particular importance as in Dagestan there is a very high level of corruption and a clan system, which affects the welfare of the Lezghin. Southern Dagestan receives less funding, its economy and social sphere are underdeveloped, and the level of unemployment is very high, which has led some members of the Lezghin community to abandon their lands. Unemployment among Lezghin has reached chronic levels with as many as 80% of young Dagestani Lezghin without work.
The Lezghin in Azerbaijan face more complicated issues. These are associated with direct and indirect assimilation policies initiated or supported by the Azerbaijani authorities. Many cultural achievements of the Lezghin are misrepresented as those of the Azeri, and names of cultural and architectural monuments are being distorted, for example, the name "Lezgi mosque", which is a UNESCO World Heritage Site in the city of Baku, was changed to Ashurbek. In general, the process of linguistic assimilation in Azerbaijan is much more intensive than in Russia and is accompanied by an attempt to change ethnic identity. The Lezghin language is not widely taught and is of very low quality. The Lezghin language is only used in personal and family communication between native speakers. Administrative resources are used to further limit the application of the Lezghin language and to suppress the national consciousness of the Lezghins. If the situation does not change soon, a sharp decrease in the Lezghin population of Azerbaijan and an even more drastic decrease in the number of Lezghin speakers can be expected.
UNPO Membership
The Federal Lezghin National and Cultural Autonomy (FLNCA) is the representative of the Lezghin people in the UNPO, and a full representative of the Lezghin people before the State authorities of the Russian Federation. The core objectives and tasks of the FLNCA are the protection, preservation and development of the national and cultural interests of the Lezghins. To fulfill its intentions the FLNCA cooperates closely with political and public organizations of the Russian Federation, including the Federal Assembly of the Russian Federation, the Administration of the President, the Government of the Russian Federation and the United Russia political party. The purposes of the FLNCA’s foundation are to solve issues and restrictions surrounding the status of the Lezghins, to preserve the uniqueness of the Lezghin people, as well as to develop their language, education and national culture.