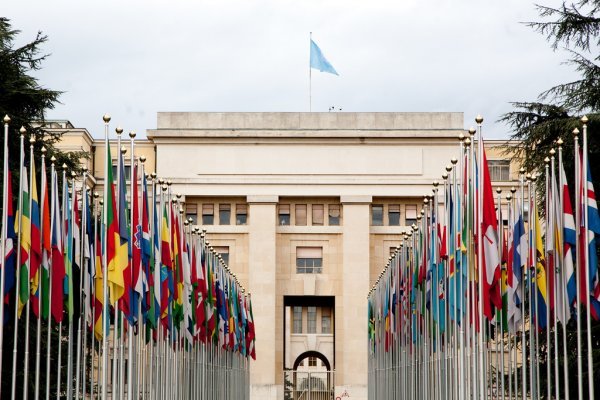 Status: an ethnic group lacking a legal status, which would secure their rights as a distinct historical community and nation in the territory of their traditional residence.

The Lezghins formed a separate nation with a language of their own in ancient times. The ancestors of the modern Lezghins had acquired their statehood long before the Current Era. Later, the Lezghins and related Lezghin nations have lost and restored their statehood and political independence several times. In its present form the Lezghin nation has been identified as a separate nation in the Soviet period of its history. Academic science in Russia, Azerbaijan and the rest of the world see the Lezghins as an independent nation. However, at present times the main problem of the Lezghins is their lack of legal status, preventing them from securing their rights as a distinct historical community and nation in the territory of their traditional residence. As a result, the ethnicity of the Lezghins is being blurred and the socio-economic situation is deteriorating.

The Lezghins speak Lezghin, which belongs to the Lezghin sub-group of the Nakh-Daghestani group of the North Caucasian language family. Lezghin is taught as a foreign language in areas where many Lezghins are settled, but unfortunately teaching resources are scarce. In addition, Lezghin textbooks come from Russia and are not adapted to local conditions. Although Lezghin newspapers are available, the Lezghins have also expressed concern over the disappearance of their rich oral tradition. The only Lezghin television broadcasting available in Azerbaijan is received over the border from Russia. The status of the Lezghin people and language is not fixed in the law. This absence of appropriate status of the Lezghin language is extremely detrimental to its development, reproduction and use in various spheres of life.

The ethnic territory of the Lezghin people is now divided into two parts between two countries. The Northern part is located in the Republic of Dagestan - one of the regions of the Russian Federation - while the Southern part is in the Republic of Azerbaijan. In the Republic of Dagestan the Lezghins are one of the 14 "titular" nations. This separation has a heavy impact on the Lezghin ethnicity, as the people are divided between two countries. The state border with Azerbaijan broke the family, social, domestic, economic and cultural ties within the unified Lezghin nation. Without proper determination of their status, the preservation of the identity of the Lezghins is under great threat.

The government authorities of Dagestan are formed by taking into account the ethnic composition of its population, but without clear regulations. This leads to the obvious imbalances in political institutions, and the Lezghins are underrepresented in government bodies. The Lezghins expressed their concern over this underrepresentation in the Azerbaijani Parliament (Milli Meclis) after a shift away from proportional representation in the parliamentary elections of November 2005. The Lezghins had been represented by two members of parliament in the previous parliament, but are now represented only by one.

In the 11th century AD, Lakz was divided into the Western Lakz and the Eastern Lakz, which then were broken up into smaller entities. Since the 16th century AD, separate free Lezghin societies appeared: Akhty-para, Dokuz-para, Alti-para, Rutul (partially inhabited by the Lezghins), which existed until the entry into Russia in the early 19th century. The Lezghins also lived in the area of Kurakh-dere and separate small rural unions of Kura which were combined into the Kyurinsky Khanate (State) in the late 18th century. It also became a part of Russia in the 19th century. In the 17th and 18th centuries, Quba, Shirvan and Shaki khanates (States) were formed in the South, where the Lezghins lived together with other peoples. In the early 18th century, the State of Shirvan inhabited by the Lezghins under the leadership of Haji Dawood Myushkyursky existed for some time, and was recognized by the Russian Empire and the Porte (the Ottoman Empire).

In the mid-19th century, the "Northern Lezghins" lived in Kyurinsky and Samursky districts and the city of Derbent, Dagestan region, formed the territory of the modern southern Dagestan. In 1921, the Dagestan Autonomous Soviet Socialist Republic was formed as part of the RSFSR, which in turn became one of the Soviet republics of the Soviet Union in 1922. The territory of residence of the "Southern" Lezghins was included in a number of districts of Baku and Elisabethpol Governorates. In 1920, these areas became part of the Azerbaijan Soviet Socialist Republic, which also became one of the republics of the USSR.

In general, the Lezghins enjoyed better rights in Dagestan under the jurisdiction of the Russian Federation than in Azerbaijan, where they were subjected to assimilation policies. The Lezghins have traditionally suffered from unemployment and a shortage of land. Resentments were fuelled in 1992 by the resettlement of 105,000 Azeri refugees from the Karabakh conflict on Lezghin lands and by the forced conscription of the Lezghins to fight in the conflict. This contributed to increased tensions between the Lezghin community and the Azeri government over issues of land, employment, language and the absence of internal autonomy. A major consequence of the outbreak of the war in Chechnya in 1994 was the closure of the border between Russia and Azerbaijan. As a result, the Lezghins were for the first time in their history separated by an international border restricting their movement.

The main problem of the Lezghins is their lack of status, preventing them from securing their rights as a distinct historical community and nation in the territory of their traditional residence. As a result, the ethnicity of Lezghins is being blurred and the socio-economic situation is deteriorating.

The government authorities of Dagestan are formed by taking into account the ethnic composition of its population but without clear regulation, which leads to the obvious imbalances in political institutions. As a result, the Lezghins are underrepresented in government bodies. This is of particular importance, as in Dagestan there is a very high level of corruption and a clan system which affects the welfare of the Lezghins. Southern Dagestan receives less funding, its economy and social sphere are underdeveloped, and the level of unemployment is very high, leading in turn to the abandonment of their lands by the Lezghins.

The Lezghins which live in Azerbaijan face more complicated issues. They are associated with direct and indirect assimilation policies initiated or supported by the Azerbaijani authorities. Many cultural achievements of the Lezghins are misrepresented as those of the Azerbaijani, and names of cultural and architectural monuments are being distorted, for example, the name "Lezgi mosque", which is a UNESCO World Heritage Site in the city of Baku, was changed to Ashurbek. The Lezghins are also rarely mentioned in official Azerbaijani history. In general, the process of linguistic assimilation in the Azerbaijan Republic is much more intensive than in Russia and is accompanied by a change of ethnic identity. The Lezghin language is not taught in all settlements, in many of them the level of tuition is very low or the subject is not taught at all. The Lezghin language is only used in personal and family communication between native speakers. Administrative resources are used to further limit the application of the Lezghin language and to suppress the national consciousness of the Lezghins. Available Lezghin media and amateur groups, which only use their own resources, demonstrate support allegedly provided to national minorities by the Azerbaijani government. If the situation is not changed in the nearest future, a sharp decrease in the number of Lezghins in Azerbaijan and even a more drastic decrease in the number of Lezghin native speakers can be expected.

UNPO has a resolute commitment to the peaceful and nonviolent campaign for the recognition of the Lezghin people as an ethnic group with a legal status, their language and political rights, and the restoration of their inalienable right as a distinct historical community and nation in the territory of their traditional residence. UNPO believes that the Russian Federation and Azerbaijan should proceed towards the full restoration of the rights of the Lezghins in accordance with universally recognized principles of international law and in dialogue with the Lezghin community representatives. UNPO promotes the engagement of the international and particularly European communities to support the process of restoring the rights of the Lezghins.

For their development the Lezghins, divided by state borders, should be granted a legal status in their historical lands, which will make it possible to preserve the Lezghian culture and language by making them in-demand for the whole population and to get protection from the government.

In this regard, it is necessary to create a national-territorial autonomy similar to a Canton in the federal system of Switzerland with extended rights of the Lezghin language, both in the Russian Federation and the Republic of Azerbaijan. The Lezghin language should get extended rights and become a language of political leaders, government employees, civil servants, and representatives of business and nonprofit organizations which work with the population. The Lezghin language should be used widely in the media and in all other spheres. This could guarantee progressive development of the Lezghins and will eliminate the threat of their assimilation and disappearance. In Russia, this should cover the territory of the Southern Dagestan, thus uniting in one constituent entity not only the Lezghins but also other peoples of the Lezghin language group, whose rights must also be protected.

The Lezghins have a rich intellectual and material culture. Oral folk arts of the Lezghins have preserved the memory about historical events of two thousand years ago. Heroic epic "Sharvili" is a peak of folk art and a record of the complicated history of the Lezghin people. Its hero Sharvili is a collective character which represents all the Lezghin people, who protected their lands from conquerors: Romans, Iranians, Khazars, Arabs, Oghuzes, Mongols. In honor of Sharvili, the annual celebration is held in Akhtynsky District of Dagestan, which has gained popularity and national recognition.

Currently, religious Lezghins are predominantly Sunnis (with a very small number of Shias). However, the Lezghins have also preserved people's beliefs and customs. The brightest holiday which unites all Lezghins is Yaran Suvar, the day of vernal equinox, which is celebrated on March 21. This original holiday is one of the symbols of the Lezghins and is very popular and it can be seen as a repository of the traditional culture. Moreover, the Lezghins still celebrate other holidays, such as the holiday of "flowers" and "bird cherry". Dance and musical heritage of the Lezghins is very rich and diversified. The famous dance "lezginka" is a landmark of the Lezghin people and is spread throughout the Caucasus.

Traditional crafts have reached a high level of development and many craftwork items have great artistic value. Lezghin carpets, both pile carpets and napless carpets - "sumakhi", are very popular, many of which are true works of art. The other well-developed fields are ceramic production, including the famous Ispic ceramics, manufacturing of knives and jewelry and other crafts. However, at present all crafts are in decline, and without their revival the cultural identity of the Lezghins will disappear.